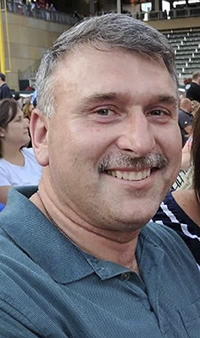 Kevin was born Oct. 8, 1965, to Bob and Judy Beck and grew up on his family’s farm outside of Conger. He graduated in 1984 from Alden-Conger High School and went to school in Jackson to become an electrician. Kevin worked as an electrician and also farmed until 1993, when he found his true calling in life and went back to college for law enforcement. He graduated in 1995 from Rochester Community College and was hired shortly thereafter by the Fillmore County Sheriff’s Department. Being hired by Fillmore County changed Kevin’s life in many ways, with the biggest way being one night in December 1995, when he went to the BP in Spring Valley to put gas in his squad car.

At the BP that night, he met the love of his life, Kristin Howard. Kevin and Kristin were married Sept. 12, 1998.  They have two children, Jordan and Shelby, who were truly his pride and joy. Kevin spent many hours watching his children participate in football, volleyball, basketball and track, which he enjoyed more than anything. Kevin was also a member of the Spring Valley Fire Department, and the day of his passing was his 21st anniversary as a member of the fire department.

Kevin was very well respected in the law enforcement field. In 1997 he became policy coordinator for the city of Spring Valley. In 2008 he attended training to become a DARE instructor. In 2012 Kevin was appointed to the position of emergency management director and assistant jail administrator. Additional duties he had included working with the county’s 911 communications center and ARMER 800 radio system. In 2017 Sheriff Tom Kaase appointed Kevin to chief deputy of Fillmore County. Kevin served in his position until he had to retire due to medical reasons. In December 2018, the Minnesota Sheriff’s Association awarded Kevin with the Meritorious Service Medal Award.

Kevin was preceded in death by his grandparents Hannible and Katherine Noble and Edwin and Dorothy Beck; and Kristin’s grandparents Bernard and Anne Howard and Duane Michener.

In lieu of flowers, Kevin’s family is requesting memorials to the Fillmore County DARE program, the Spring Valley Fire Department and Mayo Hospice.

Kevin’s family would like to thank Mayo Hospice and the nursing staff at Domitilla 4D for the care and support during his stay there.  Their kindness and compassion will never be forgotten.

“Blessed are the peacemakers for they shall be called children of God.” Matthew 5:9.