Local teacher a statewide Teacher of the Year nominee 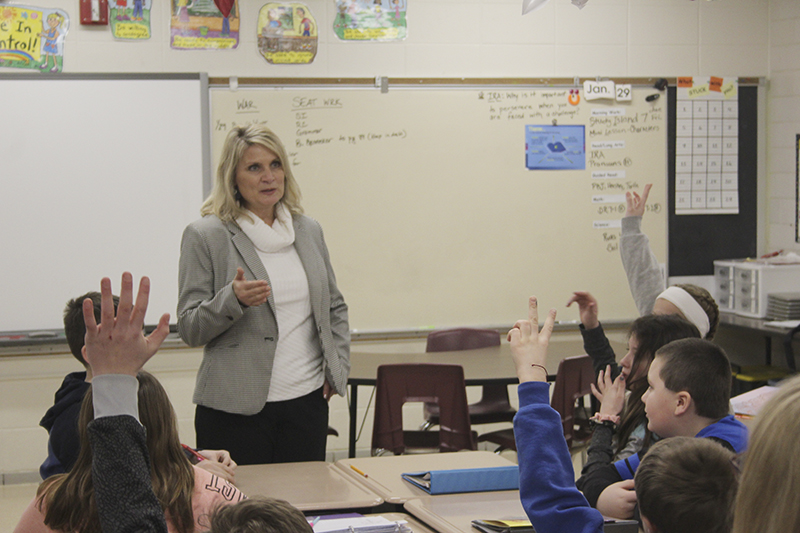 ALDEN — For Alden-Conger Elementary School fifth grade teacher Carol Thompson, a career in education once seemed like the road not taken. Now she is the school district’s Teacher of the Year, and is among a list of candidates for the 2020 Minnesota Teacher of the Year award to be decided in May.

“I don’t look at teaching as a second career,” Thompson said. “If you find something you have a passion about, or that you feel you have a calling for and it is something in your heart, you need to go for it.”

Thompson was selected by her peers in the Alden-Conger Elementary Association for “an outstanding job within the last year,” said ACEA President and fellow Alden-Conger teacher Joy Bryson.

“Carol is a very outstanding educator; she goes above and beyond for the learning of the students here at Alden Conger,” Bryson said.

Growing up in Biwabik, Thompson said she was drawn to the profession as a child. The youngest of seven, she would play “school” with her two brothers and four sisters, often taking the role of teacher. Her kindergarten teacher once remarked to her parents about how well she could control a classroom full of her peers.

Thompson said in high school she grew more and more concerned about a future in education as many schools around and including Biwabik (now part of the Mesabi East School District) began to consolidate. She was among the last 45 students to graduate from Bibwabik High School in 1988.

“During that time I wanted to go into education, but I was a little discouraged because of the lack of availabilities for these smaller schools to be independent,” she said. “Future jobs were going to the medical field.”

Thompson worked in health care information management until the birth of her son, Jake, over 21 years ago. She said she began to get involved with the Sibley Elementary School parent teacher association in Albert Lea and other parents organizations, which led to proctoring tests and eventually substitute teaching.

“Until then I felt that education was kind of a lost career that I never got the opportunity to have, or I just didn’t take the opportunity, I guess,” she said.

Thompson began her new career at Alden-Conger in 2011, teaching technology to grades two through six and working with students in reading groups.

Alden-Conger Public Schools Superintendent Brian Shanks said Thompson was one of the first hires he made in his first year as superintendent.

“She started out as a part-time teacher and she’s evolved into one of the top teachers in the school,” Shanks said. “There was an opening and she jumped right in there and hasn’t stopped since.”

Thompson also serves as the faculty advisor for the district’s LEGO League team. LEGO League is a global program focused on teaching and incorporating STEM (science, technology, engineering and mathematics) lessons to grades four through eight and serves as a precursor to the school’s robotics team.

Both Bryson and Thompson said STEM education was going to be vital for the success of her students.

“They (employers) are looking for people that have some skills and some problem-solving abilities,” Bryson said. “This whole STEM approach fits that whole bill right there. That sets them up; that’s what workers are being sought.”

Thompson is currently working on implementing a pilot program in her classroom this spring where students would learn computer coding and programing by working with small robots.

“We have more girls in this grade level than we have boys and typically the science fields are predominately more male,” Thompson said. “So I thought it was really import and for women and I — being a woman and a science teacher — thought it was important to go beyond and try to get something in technology. We have a really great LEGO League that we already do, but that’s kind of an atmosphere for only about 10 people and I wanted to incorporate that more into the classroom settings.”

Inclusion is a common theme at Alden-Conger, where about 225 to 250 of its approximately 500 students are openly enrolled from other districts. Many students, Thompson said, not only face challenges in the classroom but outside of school as well.

“There are needs that need to be met before you can reach into that (child’s) knowledge and understanding of any content,” she said. “There might be some needs — I hate to say this — that aren’t met at home.”

Thompson said children can be dealing with hunger, depression and other issues that interfere with the learning process and those need to be addressed. However, she said, those issues can’t be identified unless teachers take the time to develop relationships with their students.

“I think that’s pretty much the key: if you understand how kids are, what they’re needs are, if they need a hug that day, or if they need a high five, or they need a little encouragement or if they need someone to sit down and explain something further so they’re feeling confident with it, you have to do that,” she said.