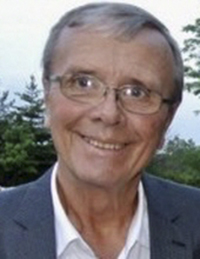 He was born and attended high school in Albert Lea.

He is predeceased by his parents Carl and Theressa Jordahl.

Marlow was a resident of Loveland, Ohio, and enjoyed spending time on Hutchinson Island, Florida, and the family cabin in Washburn, Wisconsin. Above all, Marlow cherished his family and friends. His greatest joy was attending his grandchildren’s events. He was active as a coach in Loveland Soccer Club and served on Loveland Recreation Commission. He enjoyed playing golf at the O’Bannon Creek and Oasis Golf clubs and even celebrated two hole-in-ones! Marlow was also an avid fisherman, Xavier basketball fan and bocce player.

Marlow worked as an engineer for NASA Skylab in Cape Canaveral, Florida, and Watlow Electricin Cincinnati.

A celebration of life will be held next spring.