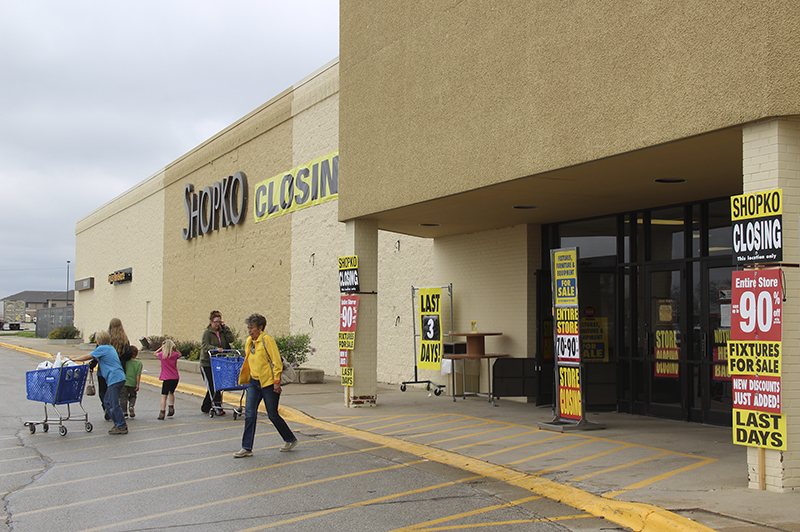 Customers walk in and out of Albert Lea's Shopko during one of the final three days for the company in the city in May 2019. - Sarah Stultz/Albert Lea Tribune

It’s been closed since last year, when Shopko, which sold everything from clothes to home goods and electronics, shuttered all of its remaining stores as part of a bankruptcy plan. In Minnesota, most were located in small towns outside the Twin Cities metro.

Given its spot, Brisson said he’s a little surprised the once-Worthington Shopko hasn’t been bought or rented already. But at nearly 67,000 square feet, the former building is a big space to fill. Even some of the country’s biggest retail chains, like Target, Walmart and Macy’s have looked to do more with less space as online shopping eats away at brick and mortar store profits.

“The building is larger than most tenants are looking for,” Brisson said. “It just seems like the whole industry is finding it tougher and tougher. Commercial brokers are having a tough time leasing out buildings of that size.”

Worthington is far from alone. In recent years, the closures of Herberger’s, Younkers, Sears, Kmart, Shopko and other big box retail stores have rippled across Greater Minnesota, leaving consumers with fewer shopping options and city officials trying to figure out what to do with the open space.

Some Minnesota cities are hoping to court new retailers, whether one or more, to fill their former Shopko spaces.

In the rural community of Mahnomen, about an hour from Bemidji in the White Earth Nation, the loss of Shopko means one less place to shop in Mahnomen — and in some cases, one more reason to drive down to Detroit Lakes to shop, said Mitchell Berg, city administrator.

Bigger cities like St. Cloud can more easily absorb the loss of a Shopko, Berg said.

Berg said residents have expressed interest in bringing an Aldi to town. But like a lot of retailers, the discount grocery chain has certain benchmarks required of communities it expands in.

“You go on their website, they want an average daily traffic count of 25,000,” Berg said — an average of about 25,000 people going past their store.

The city of Mahnomen has the road with the highest traffic in Mahnomen County, but Berg estimated its average daily traffic is around 5,500.

He has hope, though. There’s a market for retail in Mahnomen even though the community is small — roughly 1,300 residents within Mahnomen city limits, the surrounding area has around 7,000 people. Mahnomen is more isolated than, say, Kasson, a convenient 20-mile drive from Rochester, which also lost a Shopko.

Berg would like to see another retailer fill the old Shopko space. Maybe one that also has a focus on hunting, fishing and farming, like a Fleet Farm.

As far as options are concerned, retail is better for the city’s tax base than some of the other possible uses of the building. Shopko would have generated about $7,000 in tax revenue at its appraisal value. Its loss means about a 3% decline in tax revenue — not huge, but a bigger tax haul than the city would get if the building converted to, say, mini storage, he said.

In the age of Amazon, other cities — especially those where residents have lots of other brick and mortar shopping options — are looking at non-retail options for filling the former big box stores.

Glencoe, a city of about 5,500 residents an hour west of the Twin Cities, has a Coborn’s grocery store, a couple of hardware stores, a dollar store and small businesses.

“We’re pretty diverse with retail,” said Dan Ehrke, assistant city administrator, and unlike some of the smaller communities in Minnesota losing retailers, are about 20 minutes from larger Hutchinson, and not far from the Twin Cities’ western suburbs, so there’s always been some spill factor from residents shopping outside of town, he said.

Glencoe’s former Shopko site is adjacent to an industrial park. It could be used for retail again, but might also work well for light manufacturing, Ehrke said.

In Albert Lea, MercyOne, an Iowa-based chain of health facilities, has agreed to build a health clinic in space formerly occupied by a Herberger’s, according to the Albert Lea Tribune. In its initial phases, the clinic will focus on primary care. Later, it plans to expand to include OB-GYN, medical imaging and an ambulatory surgery center.

In west central Minnesota’s Fergus Falls, Shopko was one in a string of recent closures, including the closing of the local Target store and Herberger’s.

“I think very few rural communities are going to be able to have two retail shopping centers, just because of the sheer amount of online shopping,” he said.

Until it closed this year, the city’s Shopko anchored the east end of its downtown. “For a lot of people who lived in the downtown area, it was within walking distance. It filled a need,” he said.

Nonetheless, Schierer said the city’s master plan envisioned eventual redevelopment at the Shopko lot, which is right on the Otter Tail River, which runs through downtown.

If Schierer could see anything go onto the old Shopko site, he said he’d want some kind of civic building, like a community center or a theater, as identified in the city’s master plan. Something like that, he said, could spur development on a parking lot across the street to make what was once the fourth block of Fergus Falls’ downtown more vibrant.

“This national trend and the closures of these national chains in Fergus Falls came at a time when we were really looking at what is our identify, what is our future,” he said. “Our historic downtown and our beautiful river — that’s what we have to focus on, that’s our unique asset, that’s what makes us different.”