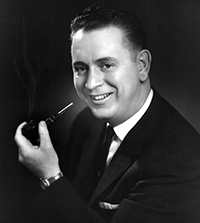 He graduated from Fergus Falls High School in Minnesota in 1943, and then enlisted in the U.S. Army and served overseas in Germany until 1945. After the war, he attended the University of Minnesota and received a degree in electrical engineering in 1950. He was then employed by Interstate Power Co. in Fulda and  Dubuque, Iowa, and in 1955 as operating superintendent in Oelwein, Iowa. In 1964 he was promoted as district manager. He then transferred in 1981 to Albert Lea as their district manager, and retired in 1988.

While in Oelwein he served as president of both the Chamber of Commerce and the Rotary Club in 1966. In 1972 He was awarded Oelwein Man of the Year by the Chamber of Commerce. He was also involved with the Knights of Columbus, Lions Club, Kiwanis Club, Veterans of Foreign Wars, American Legion and an active member of Sacred Heart Church.

He liked golf, playing cards, traveling, reading books and honey-do projects in his workshop. He was an avid  Minnesota Gophers alumni and enjoyed attending Gophers/Hawkeyes football games annually with his friends. He took his sons to many Minnesota Twins games. He enjoyed spending time with his grandchildren.

A bench was dedicated to the Phil Suchy family at Gates Golf Course in 2018.

He is preceded in death by his wife, Phyllis; son, Greg; daughter, Patty; and two brothers, Florien and Walter.

Services will be at noon Friday at Sacred Heart Catholic Church in Oelwein. A celebration of life will be at Mona’s Fire Pit Pub & Grill immediately following services.

Memorials, in lieu of flowers, may be directed to Veterans Group Wounded Warrior Project, the Alzheimer’s Association or a charity of the donor’s choice. Donations can be sent to Mark Suchy, 3202 Cypress Ave., Cedar Falls, IA 50613

Phil was a loving husband, father and grandfather. He was well-liked in his community, always had a kind word to say and made sure to inject his sense of humor into his relationships. He loved to dance a good polka and to big band music, as well as sing when he had the opportunity.