Funeral services for Shirley A. Wallace will be at 1 p.m. Friday at Bonnerup Funeral Service in Albert Lea with the Rev. Mark Miller officiating. Visitation will be one hour prior to the service. 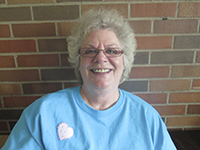 Shirley A. (Larson) Wallace was born June 23, 1941, to Norman and Helen (Wold) Larson. She was the fifth born of nine children and grew up on a farm. She was baptized and confirmed in Faith Lutheran Church of rural Colfax, Wisconsin. She attended her first two years of grade school at Colfax Grade school, and then attended the rest of her schooling at a one-room country school outside of Colfax. From there, Shirley attended four years of high school in Colfax; all four years she worked in the school cafeteria serving lunches.

At the age of 16, Shirley got her drivers license. Sometimes she would do the grocery shopping for her mother on Saturday mornings. She also helped raise her nephew, Ricky, from the time he was 3 months old until the age of 5. She worked at a local root beer stand for a summer and at a local restaurant. After graduation she lived at home, helping with the farming and the housework. She then went to work for Pearson’s Candy Factory in St. Paul. She moved back home and worked at Woolen Mills in Chippewa Falls, Wisconsin.

Shirley married at this time. From this first marriage, she lost twin boys of a premature birth complication. The twins were not named, and the married couple were later divorced.

She met her second husband, Floyd Wallace, while working at Chip-Tronic Inc. They moved to Hudson, Wisconsin, then back to Colfax, and she began working at National Presto Industries. From there, the Wallaces moved to Albert Lea. They had two children, Mary and John. Later, Shirley also worked for Jefferson Motel and Bus Lines. She and her husband would divorce at this time. Shirley then worked for Clothing Care, Ethel’s Catering, Good Samaritan Society of Albert Lea and Cedar Valley Services.

At the age of 62, Shirley moved into Senior Court, where she became involved in many activities — bingo, karaoke, dominos, learning new card games and playing jigsaw puzzles with her friend, Cathy Westendorf. Shirley also helped the manager, Sandy Stephens, a very good friend, with gardening, birthday lists and resident list updates, along with many other things. Shirley was also the Senior Court activities coordinator for three years. She enjoyed helping people.

She was preceded in death by both parents, Norman and Helen Larson; twin sons in infancy; sisters Lois Donagan and Doris Longdo; and three nephews, Ricky Larson, Rodney Longdo and Jason Schauer.