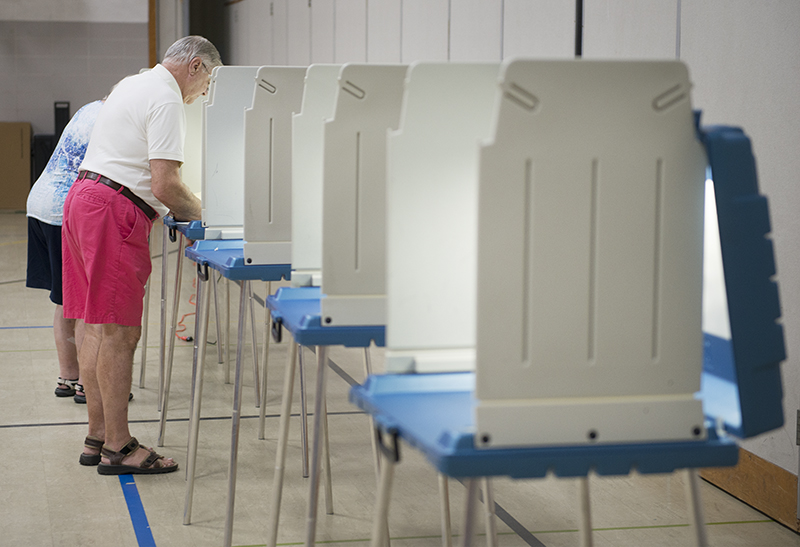 Voters cast their ballots during the primary elections in August 2016 at Brookside Education Center. Minnesota voters can begin voting for the presidential primary on Friday. - Colleen Harrison/Albert Lea Tribune

State to open early voting on Friday for presidential primary

MINNEAPOLIS — Minnesota voters will be among the first in the country to cast ballots in the presidential primaries when the state opens early voting on Friday.

That’s when Minnesotans can vote in person or request absentee ballots for the state’s March 3 Super Tuesday primary. It’ll be Minnesota’s first presidential primary since 1992, the first one that’s been binding on both parties since 1956, and only the fifth in state history. Here’s a guide:

What’s new about this?

Minnesota has ditched its old precinct caucus system that marked the start of a long process for awarding the state’s delegates to the Democratic and Republican national conventions. The caucuses required citizens to show up on a designated night, which shut out anyone who wasn’t free or didn’t want to venture out on a cold winter’s night to take part in what could be a long and contentious process. The primary is open to all eligible voters. It’s not a winner-take-all system, so the state will likely award convention delegates to multiple Democratic candidates.

Who’s on the ballot?

The primaries will determine which candidates send delegates from Minnesota to the Democratic and Republican national conventions this summer. Democrats will choose from 15 candidates, including all the big names and some that average voters may not have heard of. The Minnesota Supreme Court last week rejected a challenge to the GOP plan to list only President Donald Trump. Republican voters can write in other candidates. Democrats can vote for sending “uncommitted” delegates.

“This is really an unknown for us,” said Ken Martin, the state’s Democratic chairman. “This is the first time we’ve had a presidential primary in Minnesota for close to 30 years. It’s hard to know precisely what to expect.”

How to vote early

Minnesota now allows anyone to vote early. It’s no longer necessary for voters to say that they can’t make it to their polling place on election day to get an absentee ballot. Voters can request mail-in ballots from their local election offices or via the secretary of state’s website starting Friday. They can also vote in person at their county election office, or at some participating city offices. They’ll have to request either a Republican or Democratic ballot.

Minnesota won’t be the very first state to allow early voting in the 2020 presidential primaries — some states with more restrictive rules on casting absentee ballots have already begun — but Minnesota’s voters are being allowed one of the earliest starts.

Minnesota doesn’t have voter registration by party. But presidential primary voters will have to request either a Democratic or Republican ballot, and their names and contact data will be shared with the major parties in keeping with national party requirements. Both Martin and Republican Party Chairwoman Jennifer Carnahan said they intend to use those valuable lists for “party building,” including get-out-the-vote drives, fundraising and recruiting volunteers.

They say the requirement isn’t all that different from the caucus system, in which both parties had compiled lists of everyone who signed in at the door — and used them in campaigns.

Democratic Secretary of State Steve Simon said he sees it as a back door to a party registration system that risks discouraging some voters from participating. Simon said he plans to ask lawmakers this session to act quickly to restrict how parties can use the data.

All other primaries in Minnesota remain open primaries, including the statewide Aug. 11 primary. Voters don’t have to declare party affiliation for them, and they’re free to vote in whatever party’s primary interests them.

Minnesota hasn’t gotten much personal attention from the Democratic candidates except for a brief stop in southern Minnesota last week by former New York Mayor Michael Bloomberg, who’s also been running ads in the state. Minnesota Sen. Amy Klobuchar will mark the start of early voting by sending surrogates around the state on Friday, culminating with a rally at First Avenue in Minneapolis on Friday night.

Caucuses aren’t entirely dead. Parties will still hold them statewide the night of Feb. 25 — one week before Super Tuesday. They’re the first step in selecting delegates who will endorse candidates at future conventions, including legislative and congressional candidates.