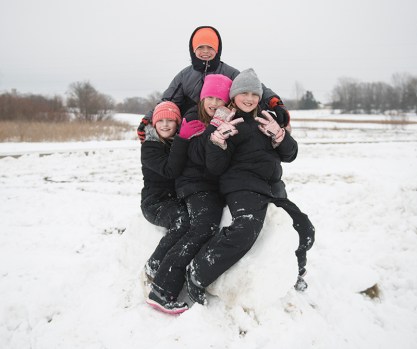 Each of the quadruplets has their own personalities, their parents say. - Colleen Harrison/Albert Lea Tribune 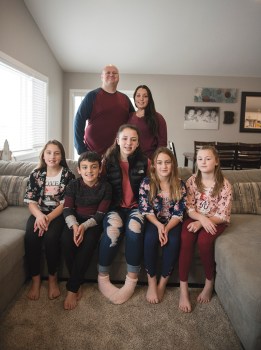 The Broskoffs have five children, four of whom are quadruplets. The children are, from left, Raegan, Shay, Presley, Hattie and Lia. - Colleen Harrison/Albert Lea Tribune 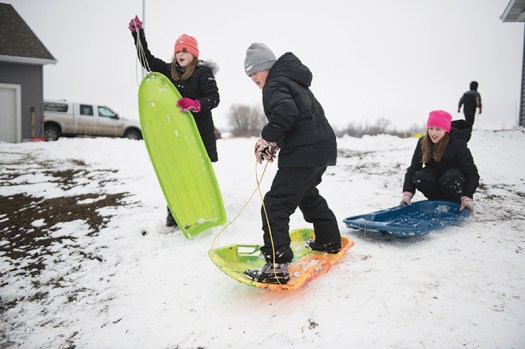 From left, sisters Lia, Hattie and Raegan Broskoff line up to sled down a hill in their backyard during their Thanksgiving break. - Colleen Harrison/Albert Lea Tribune 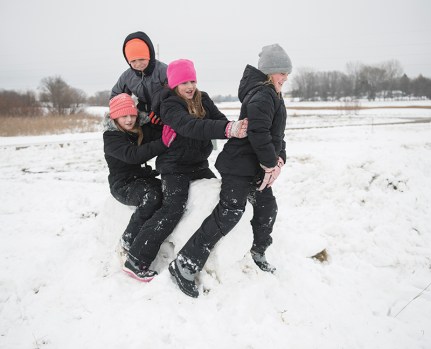 The Broskoff quadruplets sit in birth order — with Hattie proclaiming herself the oldest and Shay the youngest — to take turns pushing each other off a mound of snow. - Colleen Harrison/Albert Lea Tribune

Albert Lea couple describes life with quadruplets — plus one

Ashley and Travis Broskoff will be the first to tell you they live in organized chaos.

As parents of 13-year-old Presley and 9-year-old quadruplets — Raegan, Shay, Hattie and Lia — they admit they lead a busy life.

“We’re pretty used to the chaos,” she said.

But amid the busyness of their lives, it’s clear they also lead a life full of love and admiration for each other.

‘It always takes a village’

The Broskoffs lived in Geneva until August 2018 when they moved to Albert Lea. Travis Broskoff’s parents own Broskoff Structures, and he continues to work there.

Ashley Broskoff said she is originally from Albert Lea, and they moved to the city for more opportunities for the children. Each child has several interests, some of which overlap with the other siblings.

Shay, who she described as “100% boy,” likes gymnastics, wrestling and building Legos.

Lia, the free-spirited child, is the actress of the bunch and enjoys being in plays.

Raegan, who is organized — similar to her mother — likes to be in gymnastics and basketball.

Hattie, the firstborn of the quadruplets who likes to take charge, also likes gymnastics and basketball.

Presley, who is in seventh grade at Southwest Middle School, likes basketball, cooking and hanging out with her friends.

“They all have huge, different personalities,” Ashley Broskoff said.

While taking care of the quadruplets has gotten easier in some ways, it has gotten harder in others.

“I think every stage in their growing-up lives has different challenges,” Ashley Broskoff said.

When the children were babies, the biggest challenges were making sure they were all fed and changed, she said. Now, it’s making sure their homework is done, that they get to their activities and that they’re all supported emotionally.

“It always takes a village,” she said. “We did have a lot of help. … I still have girlfriends that help with transportation.”

The Broskoffs both grew up with somewhat larger families — Ashley Broskoff had four sisters, and her husband had three. She said they know the value of having support from siblings.

She said her quadruplets have always shared a strong connection, and she hopes that continues as they get older.

She gave the example of when they first moved to their new house in Albert Lea, and the children were each going to have their own rooms. The mother said each child got to decorate their room, but then within two months, they were asking to share rooms again like they had done at their old house.

“There’s a bond that I think is pretty unexplainable,” she said. “They fight like cats and dogs, but at the end of the day, they know they love each other.”

To keep track of all of their activities, Ashley Broskoff has a paper calendar, where she writes all of the activities happening for the family.

The couple said they recognize their children are involved in a lot of activities, but they think it’s good for them to try different things.

Travis Broskoff said he thinks things have gotten somewhat easier since they moved to Albert Lea, but it’s still a challenge.

At home, all of the children are expected to help out around the house, clean up after each other and do other basic chores such as making their beds in their bedrooms.

Ashley Broskoff said some may say her children do a lot of chores — including laundry, dishes and vacuuming — but “my job is to make these people into decent human beings, and they will thank me some day.”

The mother said the quadruplets were conceived naturally, and she often tells herself there is a reason why she’s supposed to have quadruplets.

“They’re trying to teach me something, and I try to teach them, too,” she said.

In the early days after the quadruplets were born, she said they could not have survived without people who volunteered to help them out. For this reason, the family has made volunteering a priority as they try to repay the goodwill that was given to them.

And though their lives may be a bit more hectic than some, in reality she said they are really a lot like others.

On Fridays, after what is usually a long week, they said the family likes to relax and watch movies, and each summer they like to go on an annual camping trip.