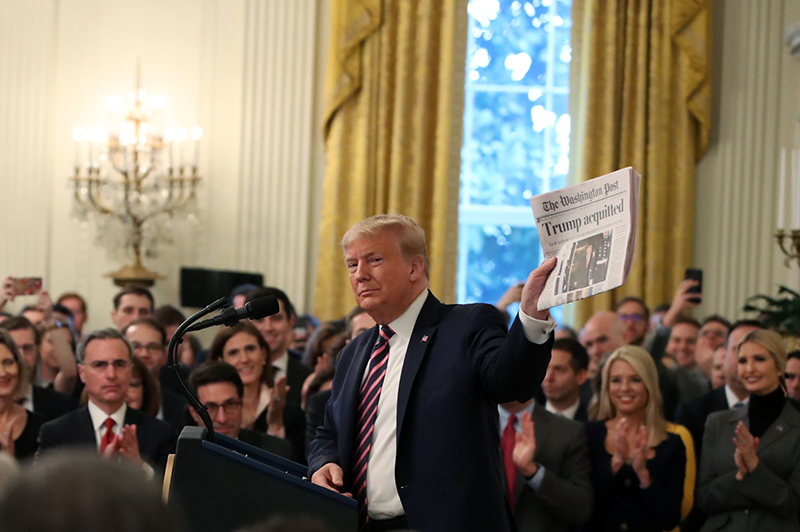 President Donald Trump, surrounded by members of his administration and supporters, holds up a newspaper during remarks at the White House on Thursday. - Mark Wilson/Getty Images via MPR News

Locals react to impeachment outcome, look to the future

Area residents, like the rest of the country, are split in their reactions to the outcome of President Donald Trump’s Senate impeachment trial that ended this week in acquittal.

The Tribune reached out to members of both the Freeborn County Republican and Democratic-Farmer-Labor parties for responses to the decision.

Aaron Farris, a member of the Freeborn County Republican Party, said Trump’s acquittal by the Senate was not only a victory for Trump and his supporters, but for all Americans.

“This purely partisan impeachment, which began on the day Donald Trump won the 2016 election, has prevented Congress from working on the real issues affecting everyday Americans, wasted $32 million, put politics above the needs of the country and greatly increased the political division of American families,” Farris said.

He accused Congressional Democrats of using the impeachment to try to remove “a duly-elected president” from doing his job and said Trump and Congressional Republicans will not be deterred from doing the work of the American people, Farris said.

Republican Spencer Krier of Glenville is looking ahead to the November election.

“I was glad to see the Democrat’s impeachment sham come to an end this week and look forward to the president carrying Minnesota’s 10 electoral votes for the first time since 1972 in what will be a landslide re-election,” Krier said.

Republican Al Arends said though he didn’t think Trump’s actions were to the level of an impeachable offense, he has a hard time supporting the president because he is “always looking for a fight.” He questioned how Trump can bring the country together but noted that an impeachment would have torn the country apart.

He said he thinks Trump should have received some type of warning about his actions.

Leslie Kaup, Freeborn County DFL Party vice chairwoman, said while she was disappointed in the outcome, she was not surprised.

“This acquittal does not take away the fact that the president was impeached by the House for abuse of power and obstruction of Congress,” Kaup said. “Now that this process is complete, we all need to look forward. The presidential election is now only nine months away. We must do all we can to protect the democratic process from domestic or foreign interference so that the outcome in November is truly the will of the people.”

Freeborn County DFL Party Chairwoman Julie Ackland said though many people felt the impeachment would not go through in the Senate because of the Republican majority, the Democrats felt they had to move forward with it because of Trump’s actions.

“I do not think they had much of a choice but to pursue this,” Ackland said.

Ackland said she felt bad for Lt. Alexander Vindman, one of the National Security Council staff who listened to Trump’s call with Ukranian President Volodymyr, and Romney, who voted against the president on one of the charges, and who she said are “both being punished for having ethics and standing up for what they believe is right.”

“Sure enough, Trump retaliated by deriding the former GOP standard bearer for using ‘religion as a crutch,’ and ridiculed him for losing in 2012,” Vogt-Erickson said. “Personal integrity is poison to Trump. He has no tolerance for anything less than lockstep loyalty, and the rest of the GOP senators just gave him a golden pass to keep on abusing power.”

While it is unfortunate, she said voters are ready to restore temperance, honesty and accountability to the Oval Office in November.