A part of the process 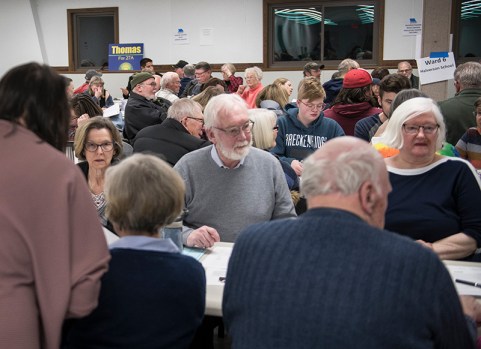 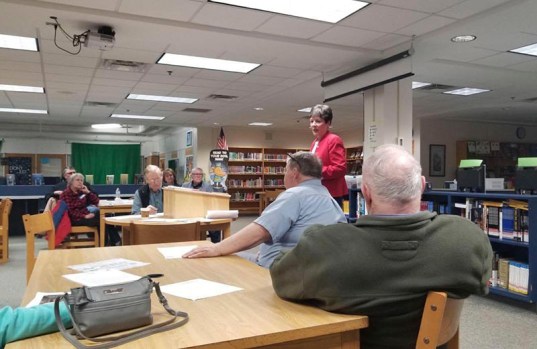 District 27A Rep. Peggy Bennett speaks with one of the groups at the Freeborn County Republican Party caucus Tuesday night at Southwest Middle School. - Provided 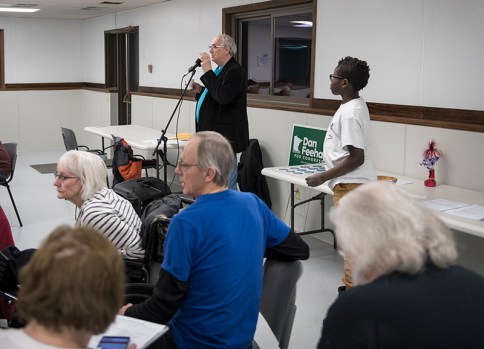 Freeborn County residents on both sides of the political spectrum came out Tuesday night to rally in party caucuses, hear from candidates and talk about issues important to residents in each party.

“I love my country, and when you have a chance to be involved you should,” Republican Annie Schleck said of why she came out to caucus at the school.

Schleck, who caucused with residents from wards 2, 3 and 4, said her group passed a resolution in support of President Donald Trump’s recent announcement in support of the effort to plant a trillion trees all over the world.

Down the hall, Republican Ebenezer Howe said though his idea for a resolution was not approved yet, he would like to pass a resolution to repeal Minnesota’s presidential primary and go back to having party members vote for presidential candidates at caucuses. He said he thinks the parties themselves should be paying for the vote instead of having the government do so in the primary. He noted he also thinks Minnesota should bid to be the first state in the country to have caucuses after challenges this year with the Iowa Democratic caucuses.

Freeborn County Republican Party Chairman Brad Edwin said the GOP caucus had a surprise visit from 1st District House Rep. Jim Hagedorn. District 27A Rep. Peggy Bennett was also in attendance and spoke briefly about the big issues for the legislative session as well as bills she is working on. She went around to the individual caucus groups to find out about peoples’ concerns.

Bennett said she spoke about the state surplus and the need to focus on current state obligations before adding new programs along with a need for tax relief, and particularly repealing the Social Security income tax. In addition, she talked about the need for tax conformity and a bill she is proposing that would require controversial items to go to the House floor as individual bills instead of being lumped into large omnibus bills.

Edwin said one of the topics that got a lot of discussion was a proposal for comprehensive sex education.

“We feel that we should have the say locally in how our children and grandchildren are taught,” he said.

Clayton Petersen said he thinks both political parties should support not losing local control of issues such as this one.

“Why have a local school board if the state is going to take control?” Edwin asked.

Not too far away, at the Union Center, the Freeborn County DFL Party caucus heard from candidates running for office or from various representatives for those candidates in addition to discussing resolutions.

Mac Erhardt, who introduced Thomas Martinez, who is running for the DFL nomination for District 27A against Bennett, said he thinks Martinez will motivate younger voters.

Martinez said though he is progressive for the area, he is there to represent the people of the area and is someone who people can relate to.

Joe Pacovsky, who is also running for the DFL nomination for District 27A, said he grew up on a farm east of Myrtle and is a graduate of the University of Minnesota.

He said one of his main concerns is with economic development and some of the problems facing Albert Lea.

DFLer Angie Hanson spoke in favor of Democratic presidential candidate Bernie Sanders and said she supported many of his ideas, including what has been termed the Green New Deal and Medicare for All. She said his campaign speaks to the young and disenfranchised.

Lynne Lent spoke in support of former New York City Mayor Michael Bloomberg for the Democratic presidential nomination, who she said is more focused on getting things done than in political party. She described Bloomberg as having intelligence, innovation and a spirit of cooperation.

Joe Brown spoke in favor of U.S. Sen. Amy Klobuchar but said no matter who is selected for the nomination, Democrats must unite behind the party’s candidate. He said some in 2016 voted for third party candidates instead of Hillary Clinton, leading to Trump’s election.

Resident Terry Gjersvik spoke in support of 1st District candidate Dan Feehan, who he said is trustworthy and who would be a congressman for everyone.

Voters will move forward next with the presidential primary on Tuesday.