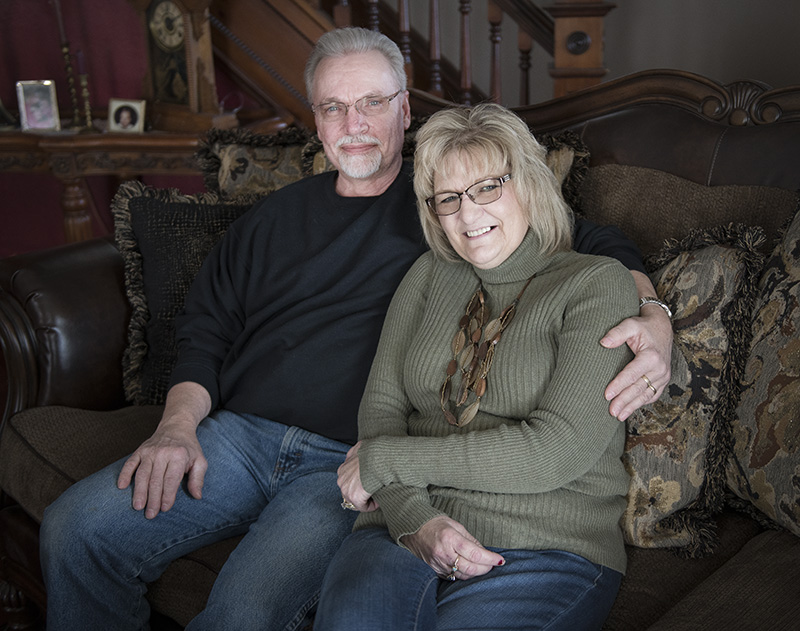 Jon and Sue Mickelson are recovering after Jon donated a kidney to his wife last month in a transplant operation. Colleen Harrison/Albert Lea Tribune

CLARKS GROVE — Clarks Grove man Jon Mickelson didn’t even give it a second thought when he found out his wife, Sue, needed a kidney transplant.

She has been a Type 1 diabetic for almost 44 years, and doctors said her kidneys had lasted much longer than others with diabetes. But one day, they took a turn for the worse.

“It seemed like one day I was fine, and then the next it was gone,” she said.

In February 2019, doctors told her she needed a transplant.

At the time she said she was taking 21 pills a day to keep her kidneys working, and every time she took them, she would get sick.

Jon Mickelson said about a month after he found out his wife’s kidneys were bad, he got checked and found out he was a match. He joked he didn’t even know his blood type at the time, so he was happy to hear the good news.

He underwent numerous medical tests — not only on his kidneys, but also on his heart and lungs, to name a few, to make sure he was healthy enough to donate.

Luckily, he passed the tests with flying colors, Sue Mickelson said, and in September 2019, he was approved for the transplant.

Though he was ready to donate his kidney, the transplant got canceled three times, as doctors needed to make sure Sue Mickelson was healthy enough for the procedure.

She said in November she started dialysis and was doing that three times a week for 3 1/2 hours each time, and she was in the hospital for most of that month.

That morning, the couple said, they went in for the surgery in Rochester at around 8 a.m. Sue Mickelson went into surgery first to make sure she had a vein that was good enough to attach to the kidney. Jon Mickelson got out of surgery at about 1:30 p.m., and she got out at 5:30 or 6 p.m.

He said he was released the following Wednesday, and his wife was released that Thursday. They had to stay in Rochester until the following Sunday so she could undergo a series of tests to make sure her body accepted the donation and that her body was functioning well. She said they have been lucky to only need to take Tylenol for their pain.

Since they’ve been home, they said she goes in for testing every week at Mayo Clinic Health System in Albert Lea, and the results are transferred to her doctors at Mayo in Rochester.

Though it has only been about a month since the surgery, Sue Mickelson said she felt improvement almost immediately.

She hopes she will soon be able to return to the popcorn stand that her family is known for: Merrill’s Popcorn. Affectionately known as The Popcorn Lady, she has been involved with the business since she was 10 years old.

The stand, which is set up near Green Mill in Albert Lea, opened in 1958 and has become a legend of sorts in the community.

Sue Mickelson said though the time leading up to the transplant was a long process, she said she thought the surgery went better than she anticipated.

She will return to Mayo in Rochester after four months have passed for a checkup.

For now, she is grateful to be at home recuperating with her husband.