The American Legion’s national commander will visit Albert Lea on Feb. 17 to talk with veterans, community leaders and citizens about how young and upcoming members are changing the American Legion and having a say in the organization’s future. 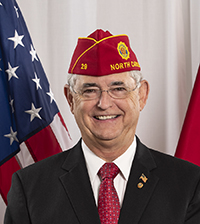 Cmdr. James W. “Bill” Oxford will be at American Legion Post 56 in Albert Lea from 5 to 7:30 p.m. The event will start with a meet-and-greet, followed by a dinner at 6 p.m. and remarks afterward, according to a news release.

“We are honored to showcase patriotic citizens throughout southern Minnesota,” said American Legion Minnesota Cmdr. Mark Dvorak. “The post-9/11 veterans are our future, and we have seen many of them join the American Legion as a way to continue serving their country.”

Oxford is also slated to discuss the priorities, challenges and strategy for the American Legion to build a foundation for the future, the release stated. The organization is 101 years old.

“It’s a pretty big deal for Albert Lea to have someone like this come to town,” said Albert Lea American Legion Cmdr. Jeff Olson.

The following day, on Feb. 18, he is slated to be at Wells Post 210 for breakfast, Madelia Post 19 for lunch and Redwood Falls Post 38 for dinner. He will be in Gaylord, Mankato and New Prague on Feb. 19.

Olson said anyone is invited to attend the event. Dinner will be available for a donation.