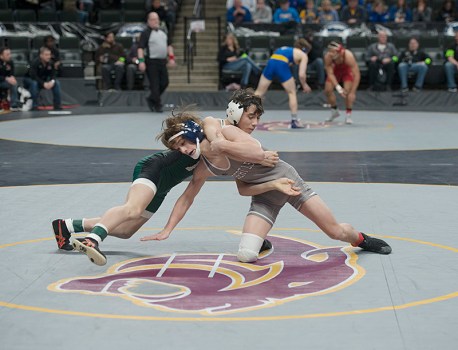 Albert Lea freshman Aivin Wasmoen tries to keep his base in the first round of his opening match at the Minnesota state wrestling tournament. Wasmoen lost his match in a 14-3 major decision. Tyler Julson/Albert Lea Tribune 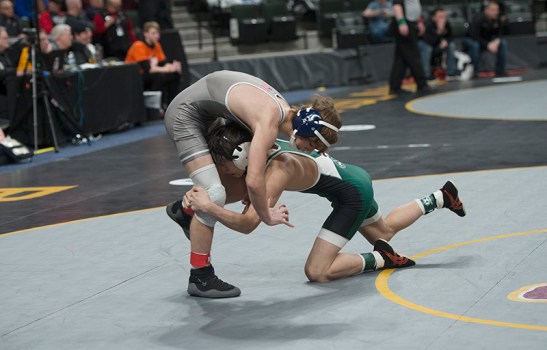 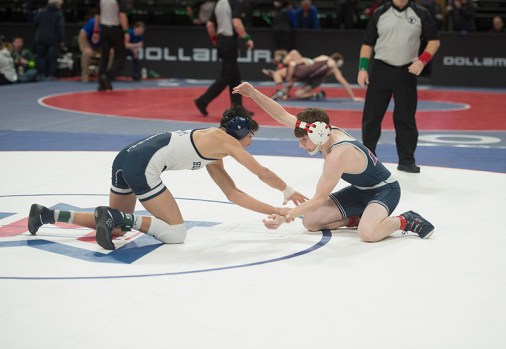 United South Central junior Bryce Sonnek gets low to the mat in the first round of his opening match at the Minnesota state wrestling tournament. Sonnek lost the match in a 1-0 decision. Tyler Julson/Albert Lea Tribune 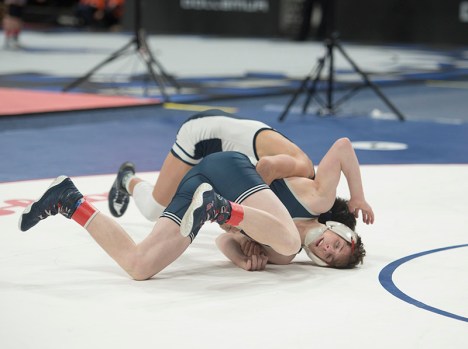 Sonnek started the third peroid on bottom and was unable to earn an escape point to tie the match before the final whistle blew. Tyler Julson/Albert Lea Tribune 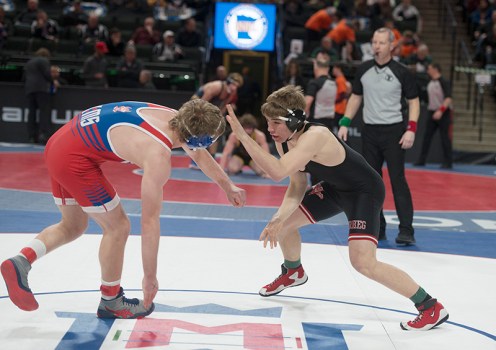 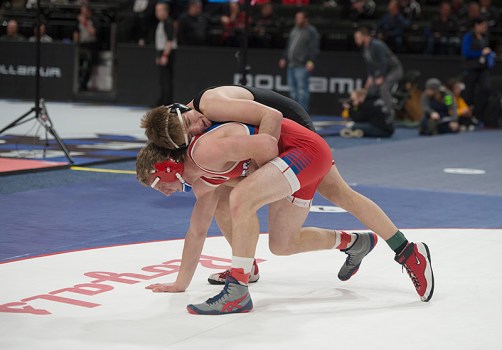 Roesler tries to keep his opponent down in the second round of his match. Roesler was hit with an illegal clasping of the hands penalty to go down 1-0 in the period. Tyler Julson/Albert Lea Tribune

After tough opening round draws, all three wrestlers lost their first matches and only one earned a wrestleback.

In Class A, United South Central’s Bryce Sonnek and NRHEG’s Ralph Roesler both drew the No. 7 seed and started the day with tough matches.

Sonnek, a junior, was first on the mat at 113 pounds. The No. 10-ranked Sonnek took on No. 8-ranked Logan Buzton of Jackson County Central.

The first period was evenly matched with neither wrestler able to gain a point on the other. Sonnek started the second period on top and allowed Buzton to get an escape point early in the period.

Again, throughout the remainder of the second period, neither wrestler could gain an advantage over the other and the third period started with Sonnek in a 1-0 hole.

Needing only one escape point to tie the match, Sonnek could not muster the energy to break away. There was a close call with around five seconds left in the period, but ultimately the referees ruled the wrestlers out of bounds and no escape was called.

Sonnek fell into the consolation bracket. Unfortunately for Sonnek, Buzton lost his quarterfinal match, thus eliminating him from the tournament.

Sonnek ends his junior year with a season record of 30-10.

Roesler, a sophomore, was up next at 170 pounds. The unranked Roesler took on another unranked wrestler in Kerkhoven-Murdoch-Sunburg junior Rick Jones. Roesler and Jones wrestled to a 0-0 score at the end of the first period. Roesler started the second period on top and gave away a point when he was called for illegally locking his hands. Jones earned a reversal with less than 10 seconds left in the period to take a 3-0 lead into the third.

Starting the third period on bottom, Roesler quickly earned an escape point to narrow the deficit 3-1. However, Jones all but ended the match shortly after by getting a takedown and back points as the final seconds ran off the clock. Roesler moved into the consolation bracket after the 8-1 loss.

Roesler suffered the same fate at Sonnek in that his first-round opponent lost his quarterfinal match, eliminating him from the tournament. Roesler finishes the season with a record of 28-11.

Albert Lea’s lone wrestler, freshman Aivin Wasmoen, started as the No. 15 seed at 106 pounds and ran into a buzzsaw of an opponent in No. 3-ranked Park sophomore Zach Silvis. Wasmoen kept it close in the first period, staving off a few takedown attempts. However, the highly ranked Park proved to be too much, as Wasmoen went on to lose in a 14-3 major decision.

Unlike Sonnek and Roesler, Wasmoen did earn a wrestleback and an opportunity to advance in the consolation bracket.

In the consolation round, Wasmoen took on Forest Lake senior Jeremiah Vanacker and came up short in a 10-3 decision. Wasmoen ends his season with a record of 32-11.