Funeral services for Harold W. Thompson of New Richland will be at 10 a.m. Saturday at Trinity Lutheran Church in New Richland. The Rev. Dr. Kristen Venne will officiate. Interment will be in Hartland Cemetery. Military honors will be accorded. Visitation will be one hour before services at the church. Friedrich Funeral Home is assisting the family. 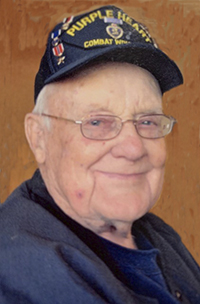 Harold William Thompson was born Dec. 12, 1924, in Manchester, the son of Arthur and Caroline (Sibelrud) Thompson.  He attended and graduated from Freeborn High School.  Harold proudly served in the United States Army during World War II.  He served in New Guinea, Philippines and Korea. Harold served his country for two years. He was in combat for 212 continuous days on Luzon Island in the Philippines. When he was honorably discharged he received the Victory Medal, Asiatic-Pacific Theatre Ribbon with one bronze battle star, Philippine Liberation Ribbon with one bronze battle star, Overseas Service Bar Army of Occupation Medal, Japan Good Conduct Medal and the Purple Heart.

On June 30, 1951, Harold married Helen Legried at Hartland Lutheran Church in Hartland. They later made their home in New Richland and were married for 68 wonderful years. Harold was the co-owner of Thompson’s Body Shop in New Richland for 40 plus years. Harold was active in the American Legion, VFW and the Disabled American Veterans. In his spare time he loved to garden, hunt, fish, camp and travel. He loved his family very much and was so proud when grandchildren became a part of his life.