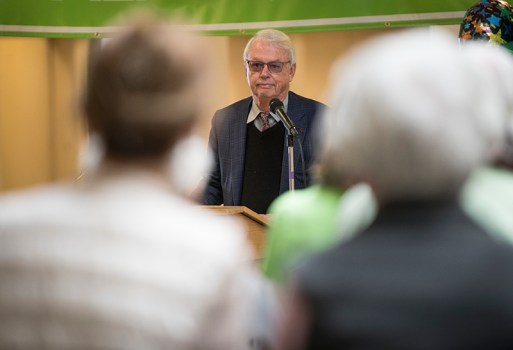 John Morrison, an Albert Lea High School graduate who donated $1 million to the Albert Lea Healthcare Coalition, is given a standing ovation Friday during the official closing on the former Herberger's property. - Colleen Harrison/Albert Lea Tribune 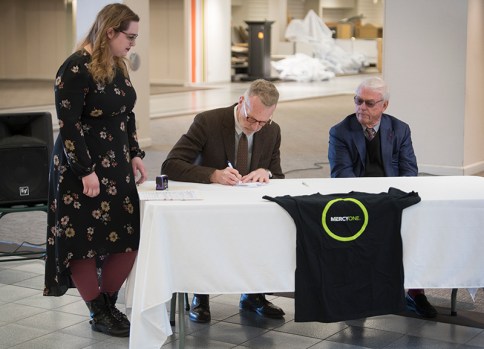 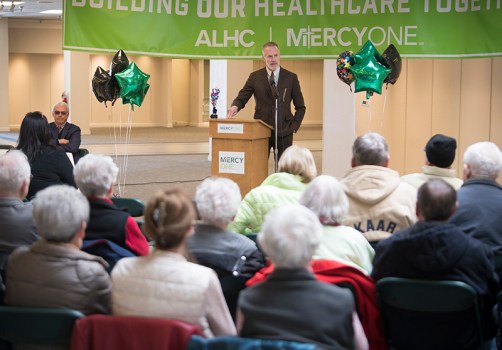 Brad Arends speaks to those in attendance Friday before signing closing papers for the former Herberger's location at Northbridge Mall, which will become a MercyOne clinic. - Colleen Harrison/Albert Lea Tribune 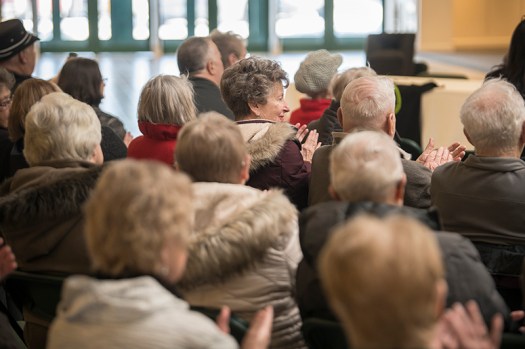 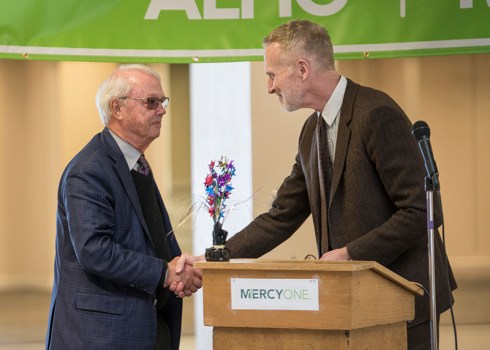 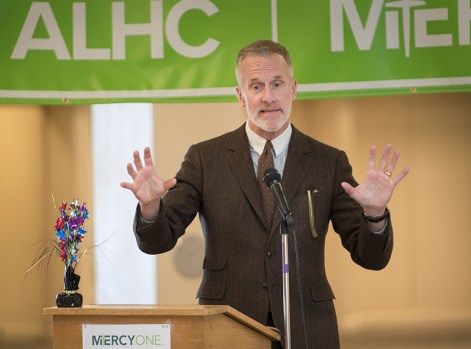 Brad Arends said Albert Lea Healthcare Coalition is 80% of the way toward its first buildout goal, and pushed the community on Friday to help achieve the rest of the goal. - Colleen Harrison/Albert Lea Tribune

The Albert Lea Healthcare Coalition and dozens of members of the community on Friday celebrated the closing on the former Herberger’s building at Northbridge Mall and met the Albert Lea native who played a key part in making it happen.

Coalition trustee and president Brad Arends signed several documents as audience members sat in silence, and once the signing was completed, he looked up, and the crowd erupted into applause.

“No turning back now,” he said with a laugh, as more clapping ensued.

The coalition now owns the building and plans to partner with MercyOne North Iowa to bring a new clinic to the community later this fall.

Arends introduced Albert Lea High School graduate John Morrison of the class of 1955, who contributed $1 million toward the effort and who Arends said has also been a resource along the way after Mayo Clinic Health System announced plans to move most inpatient services from Albert Lea to Austin. At first, the grassroots effort known as Save Our Hospital lobbied for Mayo officials to keep services in town, but without any success in that effort, the group’s effort then shifted toward bringing in another provider to the community.

Arends said Morrison is connected well within Minnesota government and opened many doors for the organization. In addition to these connections, he has a background in the banking and health care industries.

“He is a proud graduate of Albert Lea High School back in the mid-50s and continues to talk about his time — his family’s time — here in Albert Lea, and also continues to get together with other graduates on an annual basis,” Arends said.

Morrison credited a teacher he had at Albert Lea High School named Hildred Tennehill for making a difference in his life and who set him on a path to “fix things.”

He said when he was in school, he was “kind of a cantankerous kid, and I wasn’t always doing the things I should be doing.” One day, Tennehill required him to stay after school and taught him an important lesson. She asked him to go to the chalkboard and told him he had to fix his way of life. She had him draw on the board a picture of a house with broken windows.

He applied that to the health care industry as well.

He said he came that morning from the Morrison Family College of Health initiated at the University of St. Thomas, named in his and his wife’s honor. He has been involved with five different health care companies that were in difficulty in some instance — four in Minnesota and one in Florida.

He recalled the day Arends’ father, Al Arends, called him and told him the grassroots organization needed money to purchase a building to recruit a second provider to town. He also spoke fondly of Mariah Lynne, who served as co-chairwoman of the Save Our Hospital organization and is now a trustee for the Albert Lea Healthcare Coalition.

“There’s nothing better that I love than this town,” Morrison said. “It did everything for me. It, frankly, was everything for me, and I feel proud to be a part of something that is important to all of us.”

He said he looked forward to coming back when the clinic is up and running.

Following Morrison’s remarks, Arends took time to thank several others who have been a part of the process in the last few years, including his wife, Tempest Arends, for her dedication in allowing him to be a part of the effort, along with Lynne and businessman Craig Ludtke, who led the process to find an alternative provider to come to town.

Arends also thanked the residents and businesses in the area, who have contributed in many ways to the project, as well as the Cuppage Foundation and union groups that have contacted him asking to contribute.

“It’s really remarkable the breadth of the support,” he said.

He said fundraising has been underway for about four months, and out of the goal of raising $4.7 million for the first buildout, almost 80% has been raised. He encouraged those in attendance to push toward the goal.

MercyOne North Iowa, which is partnering with the Healthcare Coalition to start a clinic in the building, is contributing $900,000 over the next three years and is responsible for furnishing equipment for the building valued at $1.1 million.

Plans call for starting with a primary care clinic with visiting specialists and urgent care and will expand to include an imaging center, additional specialists, obstetric services and an ambulatory surgery center at the end of the fifth phase, which he estimated would take three to five years, depending on patient load. When the clinic has reached that phase, it will utilize 40,000 square feet of the 64,000 square feet in the mall space.

Arends said supporting retail businesses are being planned for the remainder of the space.

Who is John Morrison?

John M. Morrison was born and raised in Albert Lea, the oldest of three sons of M.T. and June Morrison.

He attended Abbott Elementary School. He was student council president in seventh and ninth grade. Throughout high school Morrison was very active in drama. He was a masquer and thespian his sophomore, junior and senior years, acting in over five plays. He was appointed to the homecoming court, representing dramatics. Other groups Morrison participated in were junior classical league, visual aids club, AhLaHaSa, Tiger yearbook, Tigers’ Roar, band, football, prom committee chairman, student council and was a Rotary representative. He was senior class president and graduated from Albert Lea High School in 1955.

Morrison graduated from the University of Minnesota in 1958, where he studied pre-law. He completed a Bachelor of Science degree in business law at LaSalle University in Chicago.

One of his early volunteer activities was to serve as one of the three top men in the campaign of Hubert Humphrey for vice president. Morrison served as Humphrey’s national campaign manager.

He has a history in the banking industry and is the founder and former chairman/CEO of Central Bancshares Inc., the parent company of Central Bank, a Minneapolis-based banking organization that was merged with MidwestOne in early 2015. He has also owned Central Bank Group Inc. and Central Financial Services, a bank consulting firm and over the years has purchased more than 100 banks throughout the United States.

Morrison was the lead director and chairman of the Compensation Committee of Fingerhut Corporation, a publicly held credit card and catalog company with over 10,000 employees.

In 2007, Morrison received the University of Minnesota’s Most Outstanding Achievement Award, which is the highest award given to alumni who have attained distinction in their profession, public service and who have demonstrated outstanding achievement and leadership on a community, state and national level.

In 2000, Morrison established a scholarship program for graduating seniors of Albert Lea High School and also to underprivileged teens from the Minneapolis metro area, which allowed them to attend a college of their choice.

Morrison was recognized as a Distinguished Alumni by the Albert Lea Education Foundation in 2015.

In addition to his donation to the Albert Lea Healthcare Coalition, he and his wife, Susan, financially support The Greater Education Project through the Education Foundation.