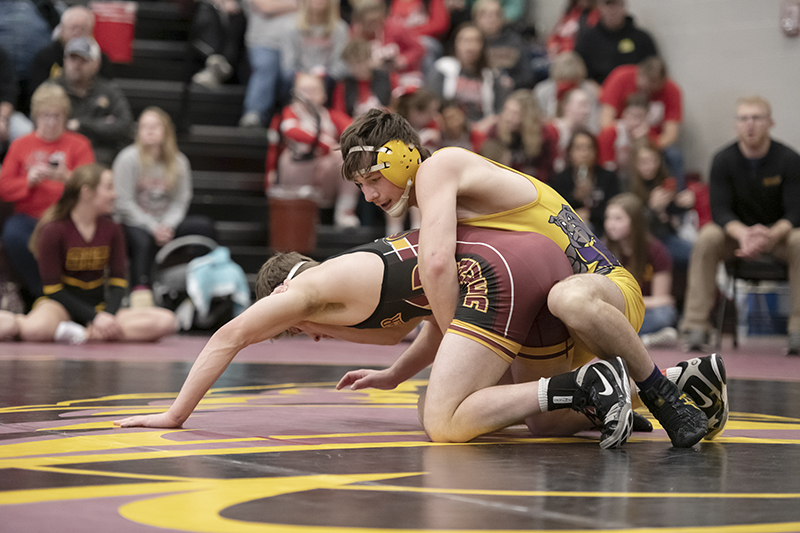 Lake Mills junior Elijah Wagner fights from the top position Saturday afternoon against his Denver opponent in the finals at 160 pounds. Wagner lost this mach, but came back to win his wrestleback and advance to the Iowa state tournament. - Lory Groe/For the Albert Lea Tribune

Three Lake Mills wrestlers and one Northwood-Kensett wrestler punched their tickets to the Iowa state tournament Saturday afternoon at the district qualifying meet in Denver, Iowa.

Dalton Thorson, Casey Hanson and Elijah Wagner are the Bulldogs who finished in high-enough placement to earn the trip and Gideon Rollene was the Viking.

In total, 11 Bulldogs and four Vikings made the trip to the qualifying meet, but only four made it out.

Thorson, a junior, was the first wrestler to earn a qualification. At 138 pounds, Thorson beat Isaac Backer by a pinfall at the last second of the first period. In the finals, Thorson beat McKade Munn of Nashua-Plainfield in a tight 4-3 decision.

Hanson, a junior, qualified by winning the 152-pound bracket. In the first round Hanson topped Denver’s Ben Feolske by a third-period fall. He made quick work of West Hancock’s Bryer Subject in the finals, winning by fall at the 1:16 mark. 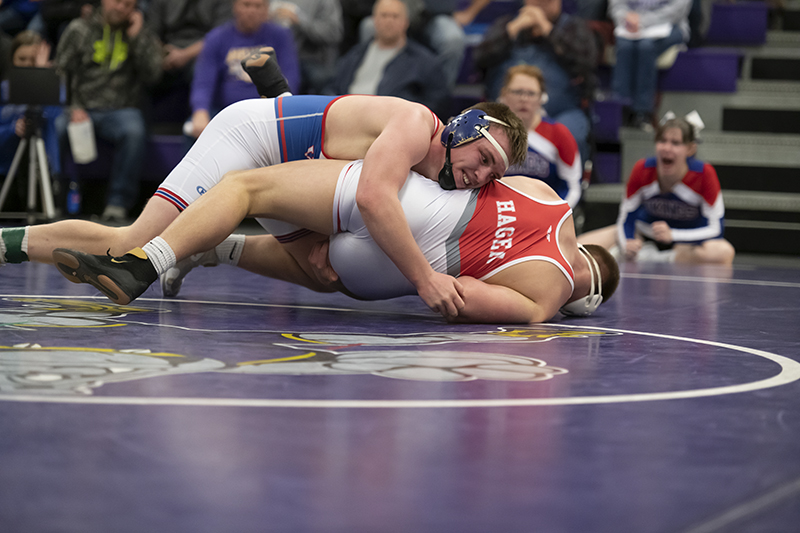 Northwood-Kensett senior Gideon Rollene attempts to flip his opponent to his back at the sectional tournament Feb. 8 in Lake Mills. Rollene won both the sectional and district tournaments to reach the state tournament in Des Moines. – Lory Groe/For the Albert Lea Tribune

Wagner, a junior, had a slightly harder road to his second-place qualifying run. Wagner won his opening-round match at 160 pounds over Nashua-Plainfield’s Cael Brunner in a first-period fall. However, Wagner fell in the championship match in a 3-1 decision to John Ebaugh of Denver. In the second-place match, Wagner dominated Riceville’s Drew Fox 6-0 to earn his spot at the tournament.

All four wrestlers will start their state tournament bids starting at 6 p.m. Thursday in the Class 1A quarterfinals at Wells Fargo Arena in Des Moines.