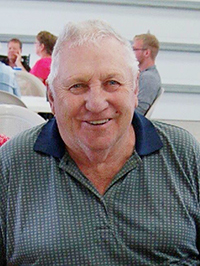 Marvin was born July 16, 1936, in Knoxville, Iowa, to Coniston E. (Smith) and Mervin L. Zeller. He lived in Cedar Rapids, Spirit Lake, Packwood and Marathon, Iowa, where his father was a county agent and rented farms. In 1950 his family purchased the Howe farm south of Alden, where they crop farmed and raised purebred Hereford. Marvin graduated from Alden High School in 1954 and enlisted in the U.S. Army. He played football during his tour of duty in Germany and traveled Europe, receiving his honorable discharge in July, 1956.

He married Joyce Petersen on Feb. 9, 1958, and lived next door to the family farm.

He was active in 4-H as a youth and also as an adult leader. He was very proud of his herd of Simmental cattle and enjoyed participating in cattle shows. He was a member of the American Simmental Association and the Freeborn County Cattlemen’s Association.

He was also a member of the United Methodist Church and the American Legion Post 56.

Marvin worked for Ivan Sorensen shelling corn and worked during the pea and sweetcorn harvest at DelMonte and Green Giant for many years. He sold Farmers Hybrid seed and devoted his life to his farm and his family.

He enjoyed travel and winters in Arizona, and time with his family. He looked forward to helping with field work and driving his 1956 Ford on trips with the Classic Cruisers.

Marvin was preceded in death by his parents and brother-in-law, Robert VanDeer.

“He was bound to the land from the day of his birth, His roots anchored deep in the fertile earth. Nurtured, sustained, by the soil he grew, And his life like his furrows ran straight and true.”

A celebration of Marvin’s life will be at a later date.

Bruss-Heitner Funeral Home in Wells is assisting the family. To leave an online condolence, visit brussheitner.com.