Much ado about Bridge 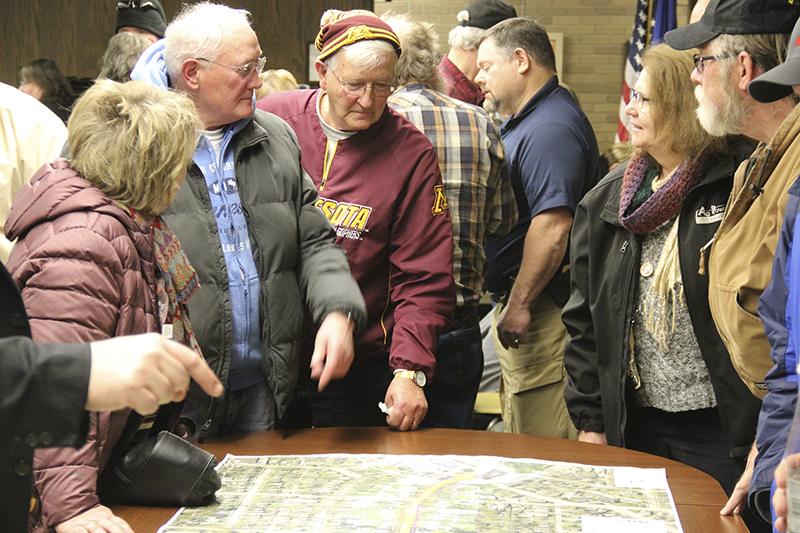 Residents shared safety concerns Wednesday about plans to remove stop lights on Bridge Avenue at the road’s intersection with Hawthorne Street during reconstruction slated for this summer.

People said they were worried that by removing the lights, motorists on the road would increase their speeds and that children crossing the road to and from Hawthorne Elementary School and area parks would be at risk for getting hurt.

“People are flying through there all the time, and when you have little kids crossing, it will only be a matter of time before someone gets hit,” said resident Heidi Blankenship, who lives two houses down from the intersection. “Is the city and county prepared for that? There’s going to be someone who gets hit.”

Instead of the stop lights, plans call for installing two pedestrian signs with flashing lights on Bridge Avenue at the intersection that can be turned on with a button. Stop signs would be placed on Hawthorne Street for motorists turning or crossing over Bridge Avenue.

Blankenship said she has lived on the street for almost 30 years and regularly sees fender-benders and people speeding and texting.

Matt Hansen, civil engineer with SRF Consulting Group, who is the project manager, said when the project was designed, the intersection was studied and was found not to have enough traffic to warrant a traffic signal. To enhance the crossing, the signs with flashing lights are being recommended.

Hansen said what to do with the road has been discussed for over a decade, and earlier studies were completed in both 2005 and 2008. 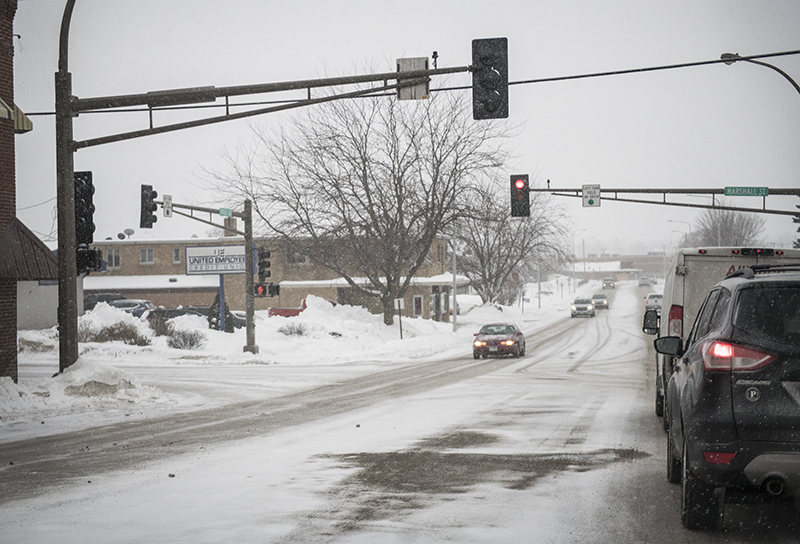 In addition to replacing the roadway itself, sidewalks and curbs will be replaced, along with the underground water and sewer lines.

He said on the south end of the corridor where it is 30 mph, there will be one lane in each direction with a shared turning lane in the middle. There will be boulevards on both sides, along with a six-foot sidewalk on the east and a five-foot sidewalk on the west. All of the trees on the boulevard will be taken out and replaced at a two-to-one ratio. New street lights will also be added at all existing intersections except for Hawthorne Street.

On the north end of the corridor where it is 45 mph, the driving lanes are slightly wider. There will be a lane in each direction with a shared left-turn lane. There will be a wider boulevard in this area with new trees and a 10-foot wide bituminous trail on the east side of the roadway.

Hansen said one of the biggest improvements will be the upgrades to the sanitary sewer and water main, which has been in place since as early as the 1930s and is past its service life. New lines will be installed to the edge of property lines, and he encouraged homeowners to consider replacing the lines from the property line to their homes at the same time.

Tree clearing is slated to start next week and continue through March, he said. An open house with the contractor is slated for April, and street and utility construction is slated to take place May through November over three phases.

He said it was clear that the county fair is important not to impede or to impede as little as possible.

Freeborn County Public Works Director Sue Miller said the project is being paid for with funds collected from the local option sales tax, almost $6 million in federal funding and state aid funds from the gas tax. She said there “will be very little if any levy dollars going into this project.” Residents along the street will not be assessed.

In addition to safety concerns for pedestrians at the road’s intersection with Hawthorne, one resident brought up the issue of visibility when turning out onto Bridge from Hawthorne during winter with high snow piles. He said he relies on the street light to let him know when to turn because he cannot see out onto the street. For him it was not a matter of traffic volume but safety.

Other residents voiced concerns that they will not be able to get out of their driveways without the stop light.

Resident Quincy Borland, who lives at the Bridge Avenue and Hawthorne Street intersection with his mother, asked if it is possible to change the proposed designs. He asked who had made the decision to remove the lights.

Hansen said elected officials have been informed of the recommendations from city staff and engineers to remove the stop lights at the intersection but advised people to contact their elected officials if they had concerns. 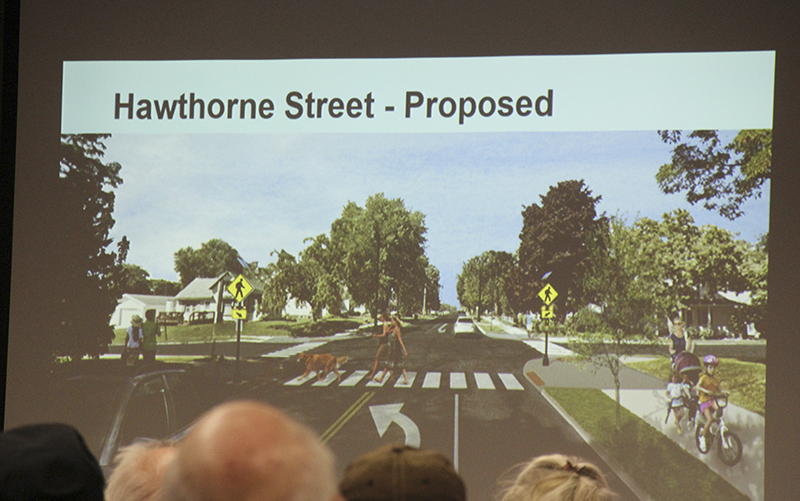 The intersection of Hawthorne Street and Bridge Avenue drew the most discussion from community members in attendance at the first of two public presentations Wednesday at City Hall. Plans call for removing the stop lights at the intersection, installing stop signs for motorists pulling out onto Bridge Avenue from Hawthorne Street and installing flashing signs on Bridge for pedestrian traffic. – Sarah Stultz/Albert Lea Tribune