Places to go, faces to paint 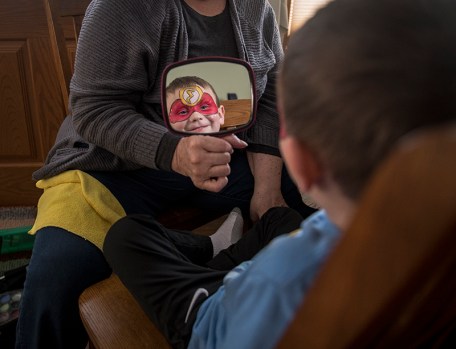 Beau Anderson, 5, with his face painted like the superhero The Flash, checks out Judy Stilley's handiwork. - Colleen Harrison/Albert Lea Tribune 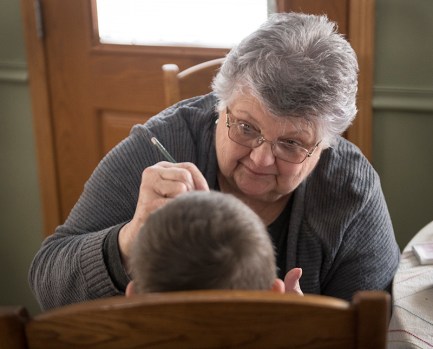 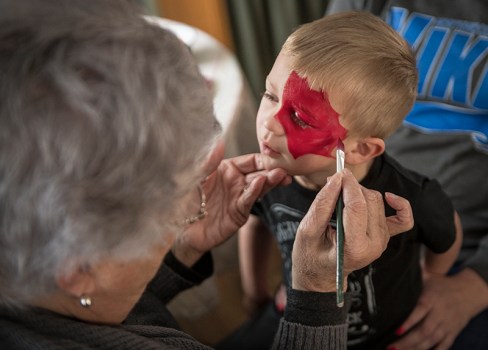 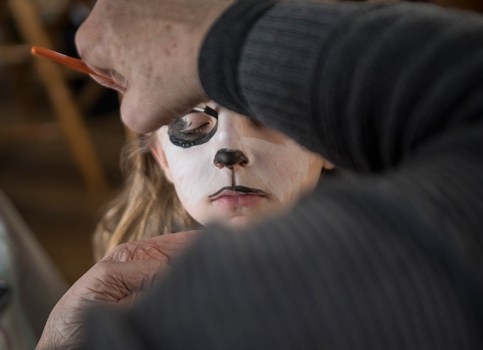 The Anderson siblings are, from left, Hadley as a panda, Beau as The Flash and Hudson as Spider-Man. - Colleen Harrison/Albert Lea Tribune

GLENVILLE —  One creative face painter has been bringing creations like two-legged tigers and three-foot tall butterflies to life at area events for over a decade.

“I’m not an artist,” said Judy Stilley, “but I’ve found I can just take a face and paint something on it. It seems to work really well for me.”

“Grandma Judy,” as she has come to be known by many, lives in Glenville with her retired husband, Bill. At 73, she said she, also a retiree, still has plenty of work to keep her occupied. She is usually almost all booked up for Christmas events every December, outside of her usual busy season from June to September.

“I’m sure I could do a lot more, but I don’t advertise because it’s plenty for me,” she said.

Birthday parties and school events led Stilley to take on an assistant, Darlyne Paulsen, to help her out during Wind Down Wednesdays, veterans celebrations and other gatherings in and around Albert Lea and Glenville.

“She really helped me out,” Stilley said. “She came down here and I had a few neighbor kids come over — and I showed her how to practice on your knee if you don’t have any kids. I had grandkids until they got old enough to say, ‘No, Grandma, we don’t want to do this anymore,’ then I had neighbor kids until they didn’t want to do it anymore. So if you sit with your knee up you can practice a little bit on that to get the feel of the brush.”

Stilley discovered her talent following a family get-together painting pumpkins at her brother’s pumpkin patch. One of the grandchildren wanted her face painted and Stilley thought she would give it a shot.

Stilley said later that day, her daughter-in-law and granddaughter were at a gas station, when a lady approached them marveling at the girl’s painted face.

“And the lady asked, ‘Does she hire out, does she do that?’ Well I hadn’t until then, that’s how I started,” Stilley said.

Stilley uses paints and brushes specifically for face painting that she buys online. The brushes are similar in appearance to oil paint brushes, which Stilley also uses, but the face painting brushes can hold more paint without dripping.

The paints dry in a matter of minutes, depending on the humidity, and usually wash off with soap and water. However, she has learned red paint seems to hold a tint on some skin, and vaseline or cold cream might be needed. That has led to at least one problem due to the popularity of Spider-Man’s mask — one of her most frequent requests.

“A little girl wanted this whole red Spider-Man and the mother asked, ‘Are you sure, because we’ve got wedding rehearsals and she’s going to be a flower girl,’ and I said, ‘Oh, maybe you better not do this because she might go down the aisle with a red face,’” Stilley said. “The little girl wasn’t happy, but she did not get a red face.”

Stilley said making children happy was her ultimate goal in face painting, an art form that allows her to visibly express her love of children.

“I absolutely just — there’s a purity, they’re truthful, I very rarely run into one that isn’t,” she said. “They’re just great kids.”

Seven-year-old Hadley Anderson has had her face painted by Stilley more times than she can count. Anderson, a granddaughter of one of Stilley’s friends, said Grandma Judy’s booth is very busy during the county fair.

Stilley said she takes about an average of five minutes to paint a face. Some designs go longer, or some of her canvases will become too fidgety and she’ll try to wrap up sooner. She tries to keep the designs somewhat simple, which not only saves on time but on the cost of materials, as well. Stilley reluctantly raised her fee from $3 to $4 to keep up with the cost of paint, although she waives her fee for school events. Her goal is to keep her art “affordable and simple.”

“The art of face painting has come a long way since when I started,” she said. “Now they use a lot of the poly-type sculptures and they use jewels and all of that, which I don’t do.”