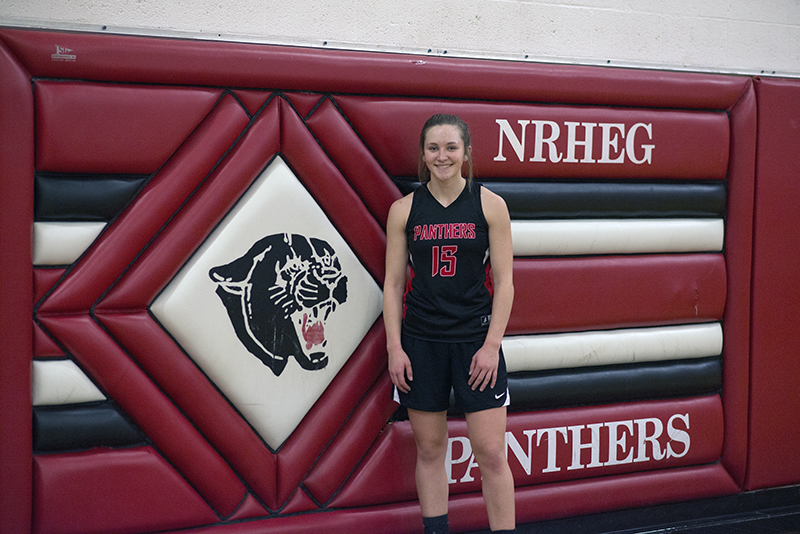 NEW RICHLAND — In only her sophomore year, NRHEG basketball standout Sophie Stork reached a feat only 12 players in the program have accomplished before. Stork recorded her 1,000th career point in a game against Triton on January 30.

“I think it’s really cool and it’s definitely an accomplishment,” Stork said. “It’s cool to be on a list with Carlie Wagner, Jade Schultz, Allison Anderson and all the big players. I think it shows how unselfish our team is because they always get me good passes. We’ve got a lot of girls that have helped a lot.”

Before the season started, Stork said she knew there was a chance she could reach the milestone this year. However, she had no idea before the game started how close she actually was. She said she grown a little suspicious when she saw signs in the crowd. Stork talked about how she felt the moment she realized she had reached the accomplishment.

“It felt really good and it was a surprise,” she said. “And it was nice because I didn’t feel like there was any extra pressure to get there.

“Now people keep asking me about 2,000, but that’s not really my worry. My goal right now is just to help my team because I want to be able to get to state before I graduate. So I just want to keep pushing myself to make the team better.”

As only a sophomore, Stork has already taken on a leadership role with the team, according to head coach Onika Peterson. Stork played on the varsity team starting as an eighth grader and has played with some great players since then, Peterson said. Stork has shown a lot of growth and progress through her first three seasons and Peterson said she thinks Stork will continue to improve.

“Just to see what she’s accomplishing and seeing the different roles she’s taking on now as a shooting guard instead of our main point guard has been fun to see,” Peterson said. “She will continue to progress, hopefully a ton. She is already a great shooter. She can attack the basket really well. So it’s just about trying to keep pushing her to make the strides and not just settle for where she’s at right now.”

This season, the Panthers have a young team, however, Stork said many of the underclassmen have stepped up to help the team in a big way. So far, the Panthers are 11-10 on the season and are fresh off a win against a ranked Blooming Prairie team.

Stork said she thinks the section is wide open this year and the Panthers could make a deep run into the tournament with the ultimate goal of making the subsection and section finals.

As for the distant future, Stork said she would like to continue her basketball career into college, but has no idea of where at this point.