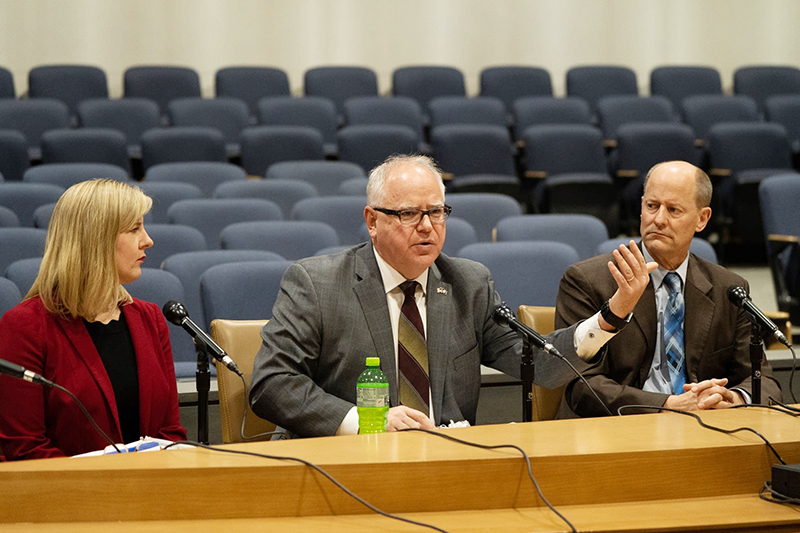 The state of Minnesota is expected to have a budget surplus of $1.513 billion over the next two years, the state’s budget office predicted Thursday.

This is an increase from the $1.3 billion surplus that was predicted in December.

Lawmakers will use the $1.5 billion forecast as the basis for a revised budget in the current legislative session. Leaders in both parties called to spend the surplus on their existing priorities, with Democrats pushing for more funding for education and Republicans for tax cuts.

Gov. Tim Walz, a Democrat, will be releasing a supplemental budget in the coming weeks that includes new spending but also increasing the state’s budget reserves.

The state office of Minnesota Management & Budget forecasts the state’s revenue and expenses based on an economic forecast compiled for the state by a private company, IHS Markit, and reviewed by the state’s Council of Economic Advisers.

Thursday’s forecast comes amid widespread concern over COVID-19, the new coronavirus. IHS predicted “temporary and modest impacts on the U.S. economy” from the coronavirus, but acknowledged a chance that a “prolonged and widespread outbreak” could have a more profound impact on the economy.

“Demand for U.S. goods exported to China and other Asian countries, including agricultural commodities, can fall, as economic activity slows in that region,” said Laura Kalombokidis, the state economist. “U.S. manufacturers that import intermediate goods from Asia must adapt to supply chain disruptions. And U.S. consumers may spend less as uncertainty increases and financial market volatility dampens growth in household wealth.”

Minnesota Management & Budget took this economic forecast and estimated how it would affect the state’s budget. Minnesota works off of two-year budgets, with its current budget beginning on July 1, 2019, and ending on June 30, 2021.

Compared to November’s $1.3 billion forecast, MMB predicted Minnesota would take in an extra $89 million in tax revenue for the current budget, and spend $91 million less.

The extra revenue is driven by rising receipts from Minnesota’s tax on business income, which is expected to take in $217 million more than previously thought. That more than offsets lower forecasts for the state’s sales tax and personal income tax.

The lower expenditures are due almost entirely to slower growth in E-12 student enrollment, which lowers the amount the state has to spend on schools.

There is considerable uncertainty about this budget forecast, though how much is impossible to say right now. MMB will produce a report on uncertainty in the forecast, but not until next month. Two years ago, that uncertainty report clarified that MMB’s total revenue forecast of $44.8 billion had a margin of error of plus or minus $1.29 billion.

How to spend the money

Thursday’s forecast didn’t change the dynamic at the capital. Lawmakers were already debating how to spend a budget surplus. Now they’ll just have slightly more to spend than they expected.

Republicans quickly called to return the budget surplus to taxpayers in the form of tax cuts.

Gov. Tim Walz has proposed a range of new spending. But he’s also urged legislators to beef up reserves to guard against an economic dip.

“I’ve been preaching the doctrine of a conservative, rainy-day fund approach — the things around children and the emergency funding we need, and go from there,” Walz said Wednesday ahead of the economic forecast release.

Walz intends to release a supplemental budget around March 10. Among other items, he has said his plan would include millions of dollars in spending recommendations for broadband expansion grants, disaster response, increased rape-kit testing and farm safety initiatives.

Outside interests also called for spending the surplus on their priorities. The Minnesota Chamber of Commerce, for example, urged lawmakers to pass a tax cut for small businesses, while the Association of Minnesota Counties said the top priority should be reimbursing the federal government $8.8 million mistakenly paid to counties due to miscalculations by the state Department of Human Services, which could otherwise be charged to the counties.

The nation’s economy is currently in the midst of the longest growth spurt in modern history. The expansion has begun to taper some, but there’s not consensus among economists about when the next recession will hit.

Since the last economic rough patch, Minnesota has rebuilt its reserves to more than $2.3 billion.