Richard Robert “Dick” Stenzel, 84, of Wells died Monday, Feb. 10, 2020, at Parkview Care Center. A Mass of Christian burial will be at 10:30 a.m. Saturday, at St. Casimir Catholic Church in Wells. Visitation will be from 4 to 7 p.m. Friday at Bruss-Heitner Funeral Home in Wells, with a prayer service at the conclusion of the service. Visitation will continue one hour prior to the service at the church Saturday. Interment will be in St. Casimir Catholic Cemetery with the Rev. Greg Havel officiating. Bruss-Heitner Funeral Home of Wells is in charge of arrangements. See www.brussheitner.com to leave online condolences. 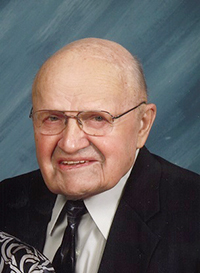 Richard Robert was born Sept. 19, 1935, the son of Alex and Amelia (Bushlack) Stenzel in Dunbar Township, Faribault County. He was a 1954 graduate of Alden High School.

Dick was united in marriage to Barbara Wacholz on June 8, 1961, at St. Theodore Church in Albert Lea. Dick was a farmer all his life. He was on the Alden Co-op. Elevator Board and served as an FSA director. Dick was a lifetime member of St. Casimir Catholic Church and a lifetime of the Knights of Columbus. He enjoyed a good game of cards, shaking dice, being outside and polka music. Dick was also an avid Minnesota sports fan, watching the Twins, Vikings and Timberwolves — play ball!

He is preceded in death by his parents; brother, Clem Stenzel; and in-laws Dick and Judy Wacholz and Robert “Mike” Mikolajczyk.