Southern Minnesota Education Consortium opens new location off of I-90 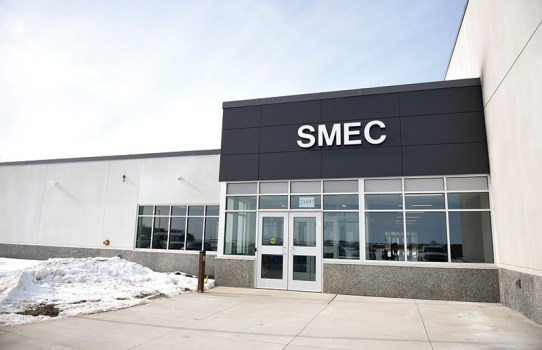 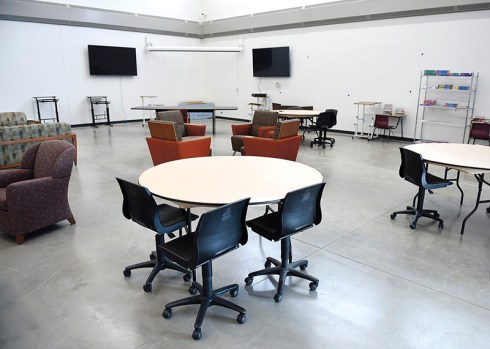 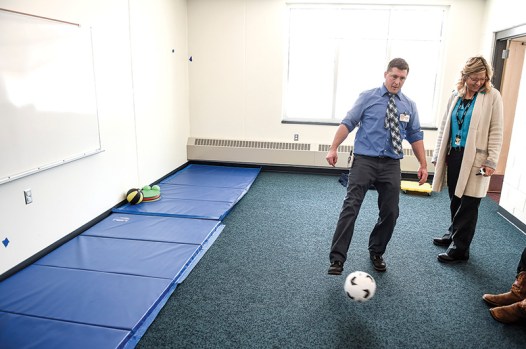 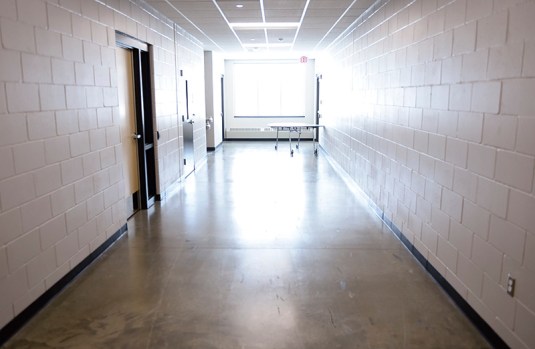 This hallway at Southern Minnesota Education Consortium was designed to allow situations in which Level 4 students can calm down if need be. Eric Johnson/Albert Lea Tribune

School is used by 7 districts, including Glenville-Emmons and Alden-Conger schools

The $4.1 million facility is located off Interstate 90 on Highway 56 and serves to teach students who need a Level 4 facility or Alternative Learning Center.

By the end of the year, between 50 and 70 students will be attending class at the school.

A Level 4 program is by definition a program where students are educated away from their peers. By comparison, in a Level 1 special education program, students are with their peers 80 percent of the school day and have specialized instruction for the other 20 percent. In a Level 3 setting, the student is in specialized instruction the whole day, but they are still at the regular public school.

Students can be put into a Level 4 program based on mental health needs and how they display their anger, but they are still students who need to be educated in a safe, caring environment, Executive Director Dan Armagost said.

These programs are not at a juvenile detention facility and are not court ordered, Armagost said. They are all about academics and the mental health of students.

“Our focus is academics. But we know our students don’t focus on academics until their mental health needs are taken care of,” Armagost said.

Armagost said the issue is about helping students and sometimes that cannot be done in the traditional school setting.

“It comes down to students needing help and making sure they’re getting the help they need,” he said.

The decision on whether a student is placed in a Level 4 program is made by educators and the student’s Individualized Education Program (IEP) team, according to Armagost.

His view is that if the behavior cannot be controlled, then the setting the student is in should be.

At the Level 4 side of the school, all entrances and exits are controlled through fob devices, making it secure.

“If you can’t control the behaviors, you really want to control the setting,” Armagost said.

The new facility allows for settings to be controlled and its staff is also trained to handle situations.

Special Education Director Denise Kennedy said this is also not meant to be forever. SMEC offers meaningful programming to educate its students and the goal is that once they are ready, they can go back to their home districts.

“It’s not a life sentence,” she said.

Everyone needs extra support at some time in their lives and the earlier it is done, the better off a person will be in the long run, Armagost said.

Sheena Gasner, who is helping the district set up the Level 4 program, said this is all about helping parents and the regular school districts in what they do — developing the students into healthy members of society.

Having these students in a traditional setting where it is one teacher and 30 students means they cannot get the support they need, she said. This does not mean the students get their way and don’t have to learn curriculum, but it does mean they will learn those things in a way they can process it.

Teaching these students coping skills so they learn how to deal with their anxiety, anger and other emotions is critical for them to learn general curriculum, Gasner further explained. Most important in guiding these students is to make sure that staff are trained and they maintain their composure.

“Your staff have to remain one step more regulated than the child,” Gasner said.

When kids go into either fight-or-flight mode or super emotional mode, somebody needs to stay in control to get the student to calm down.

“You could be doing this in a barn. If you have good staff with good skills, you can make amazing changes with kids,” Gasner said.

A lot of time is spent training staff, Armagost said.

The Level 4 program is a small portion of the facility’s population, while the ALC program has the majority of its students.

That program serves secondary students who are not on track to graduate.

Armagost said it comes down to the fact that not all students learn things the same way. In this setting, teachers can work with students on how best they learn, whether it is through projects, instruction-based or in other ways.

If a student has just a few classes that are between them and graduation, SMEC can focus on those, according to Armagost.

“What we’re able to do through our ALC is give options to cater a little bit to the students and their styles,” he said.

The program is also working with Riverland Community College so the students have the potential to get college work done by the time they leave the program.

Some students are already working on finding their career path in areas like nursing, cosmetology or carpentry.

Before these programs, there were a lot more dropouts, ALC Director Kathy Piller said. The first wave of ALC students for SMEC were previous high school dropouts. Now, all but one of them graduated. This year, 14 are expected to graduate.

“The success rate has been phenomenal,” Armagost said.

Although they can graduate through their home districts, some students prefer to finish their time at SMEC.

In many cases, these students will reach out to help one another when someone is having a bad day, Piller said.

She said the kids are very excited to move into the new building and have helped clean up the property.

In the future, Armagost said the hours for ALC students is expected to be from 8 a.m. to 8 p.m. and they are looking for work-study opportunities that can be had at the school when the students are not in class.

Kennedy said coming to SMEC can make students more mature than when they came in, as they are treated like adults.

This program can have a very positive impact on the kids and put them on a better path than they would maybe be without it, Piller said.

The job of ALC is to find a kid’s passion, Armagost said.

“Once you find their passion, they’re going to put in the time and the effort to do that,” he said.

For these students, the new facility gives the program room it did not have at its previous location, Southland Schools in Adams.

The new location is also in the middle of the SMEC region, which is economical for districts and it means more kids can access the program and have less travel time.

Staff for the program were previously spread across all seven districts.

“Now we’re finally all in one location,” Armagost said.

Services for specialties like deaf or hard of hearing services and visually impaired now have a permanent home for the first time, he said.

Each district is required to provide things like Level 4 services and if it does not have it, students have to be taken to larger districts, which is not cost-effective. It’s also not what is best for students.

“There are also students struggling with behaviors. I don’t really want them on a van ride for two hours to get somewhere,” Armagost said.

Having this facility allows for the services to be provided, while being more economical than transporting students to the metro or other areas, he said.

The new facility also has space for staff to do development work all at once, rather than in a number of separate sessions or SMEC needing to rent space for an event. With 10 acres of property to work with, the school can be added onto in the future if needed.

“The project is set to double in size when we expand to 26,000 square feet,” Armagost said.

When the expansion would take place all depends on how enrollment changes.

With a large, wooded property, the school is also able to do a lot of project work, including gardening, walking through the woods and more.

Armagost said it is great to see this project to come to completion after it had been originally thought of when SMEC was formed in 2008.

Kennedy said building their own facility allowed SMEC to design the environment in ways it could not have if it was taking over an existing building.