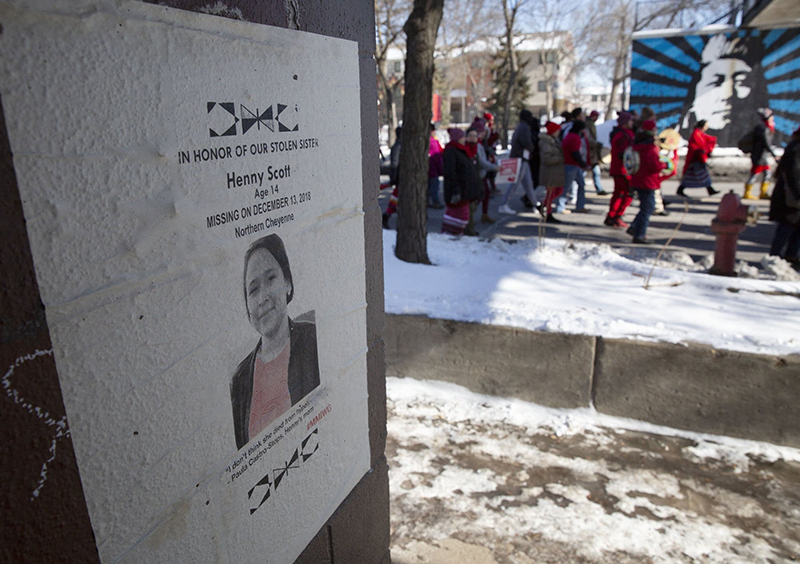 Marchers walk past a flyer in honor of Henny Scott during the Missing and Murdered Indigenous Peoples March in Minneapolis on Friday. The annual event was held in honor of indigenous people who are missing or have been killed. - Christine T. Nguyen/MPR News

Over 2,000 people marched through south Minneapolis in frigid temperatures Friday to call attention to the thousands of American Indian women who go missing or are killed in the United States each year.

Studies have shown that American Indian women are victims of violence or homicide at much higher rates than other women. Jalisa Glynn, who has Ho Chunk ancestry, said it’s empowering to see so many people recognizing that the treatment of indigenous women needs to be addressed.

“I come here and I usually get emotional,” Glynn said. “The emotions come from a place of being happy that we’re all together, but also heartbreaking that it’s going on.”

Naomi Bullchild, 29, attended the annual march to memorialize her 25-year-old cousin, who she said was killed in Montana in 2017. Bullchild said her cousin was missing for five months before her body was found.

Families and advocates complain that reports of missing indigenous women often are not taken seriously by authorities.

“It’s scary, especially because I have two little girls,” Bullchild said. “We need the population to speak out and stand up, how we’re doing today.”

The march included speeches by Gov. Tim Walz and Lt. Gov. Peggy Flanagan, as well as Jane Sanders, the wife of U.S. Sen. Bernie Sanders, who is vying for the Democratic presidential nomination.

“As a mother and grandmother, I can only imagine the pain you’ve endured when you have had your loved ones go missing or be murdered,” Sanders told a crowd packed into a gymnasium in the Minneapolis American Indian Center. “It’s an issue that hasn’t got enough attention across the country.”

The state of Minnesota convened the Missing and Murdered Indigenous Women Task Force last fall. The task force will host meetings to collect public comments throughout the state beginning Feb. 22. The task force is scheduled to report back to the state Legislature this December.