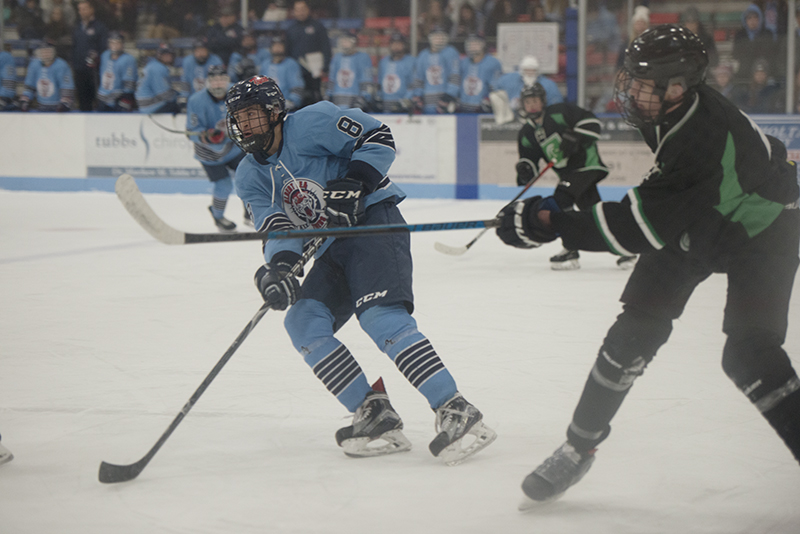 Albert Lea senior Jacob Prihoda attempts to block a clearing shot by a La Crescent/Hokah player Tuesday night at home. Prihoda scored one goal and had one assist in the 5-1 victory. - Tyler Julson/Albert Lea Tribune

An early goal from the No. 10-seeded Lancers sent the No. 7-seeded Tigers reeling. However, a three-goal second period gave the Tigers the lead, eventually coming away with the win, 5-1.

Senior Cully Larson was called for a minor penalty early in the first period, giving the Lancers an early power-play advantage. The Tigers held strong, however, not allowing a goal through the duration of the penalty.

The Lancers did get on the board about six minutes later on a break-away goal that snuck past the left shoulder of senior goalie Brad Horecka.

Down 1-0, the Tigers got plenty of looks at the other end of the ice; they were just unable to get them into the net.

Junior Blake Ulve was called for a minor penalty with just over two minutes remaining in the period, but again, the Tigers stifled any attempts by the Lancers during the power play.

La Crescent/Hokah went to the locker rooms with a 1-0 lead after the first period, despite Albert Lea leading in shots on goal 12-7. Horecka recorded six saves in the period. 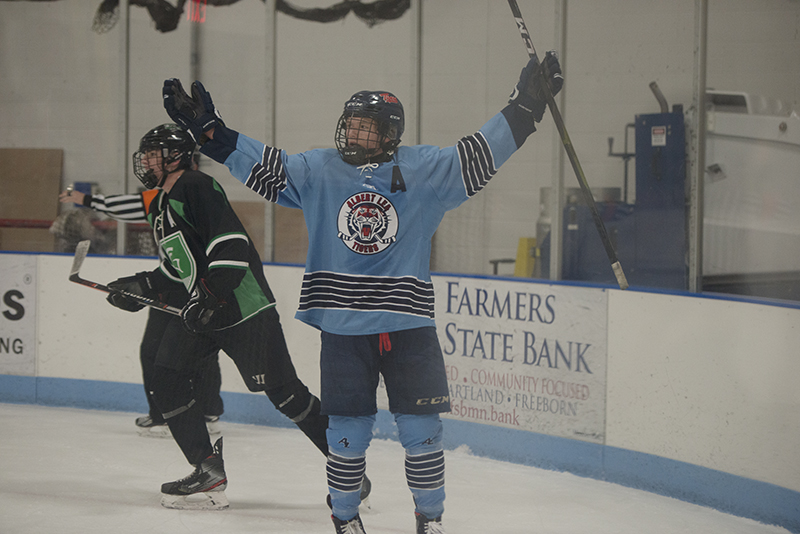 Junior captain Blake Ulve celebrates after his second goal of the game. Ulve would go on to record a hat trick in the third period. – Tyler Julson/Albert Lea Tribune

The Tigers found their footing in the second period and took a commanding lead by scoring three goals. The first goal came in the sixth minute and was scored by senior John Jenson. Fellow senior Jacob Prihoda was in on the assist.

The next goal came just a minute later, when junior captain Blake Ulve found the back of the net, assisted by senior Danny Chalmers and junior Logan Barr.

Junior Spencer Clark was called for a minor penalty with about 45 seconds remaining in the period. It seemed like the Tigers would take a 2-1 lead into the second break, but Ulve had other plans. Despite being short-handed, Ulve took the puck and scored an unassisted goal, leaving just 1.4 seconds on the clock.

Sophomore Braden Fjelsta came in to relieve Horecka in the net and saved seven shots and gave up zero in the period. The Tigers recorded 21 shots on goal in the second.

Ulve scored his third goal of the game in the second minute of the third period to record the hat trick and all but put the game away for Albert Lea. Junior Logan Hacker was in on the assist.

Albert Lea played a tough defensive game through the rest of the third period and Prihoda added a goal with 1:15 left for good measure. Junior Dylan Carlson was in on the assist.

The Tigers move to 10-14-2 on the season and advance to the Section 1A quarterfinals, where they will meet No. 2 seed Mankato West on the road Thursday night. In their two previous meetings this season, the Tigers fell to the Scarlets 7-1 and tied 2-2, respectively. 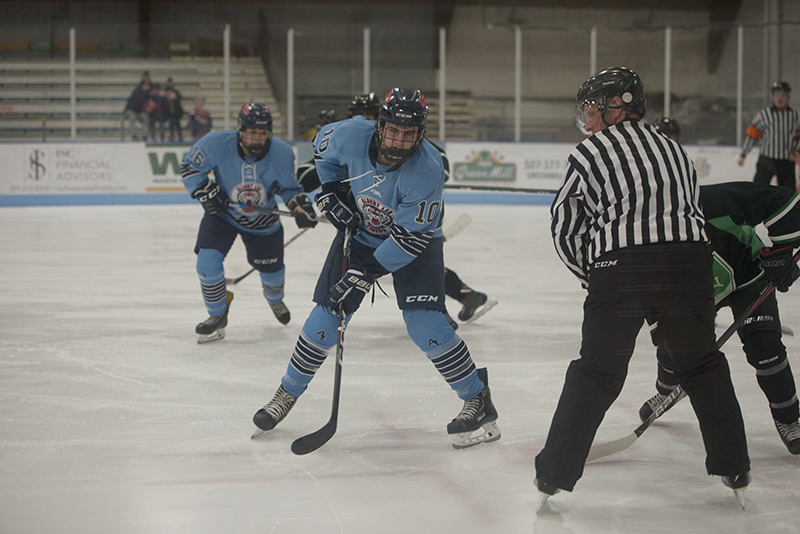 Senior Owen Zelenak wins a faceoff Tuesday night in the Section 1A opening round game. The Tigers won the game and advance to the quarterfinals, where they will take on Mankato West Tuesday night. – Tyler Julson/Albert Lea Tribune