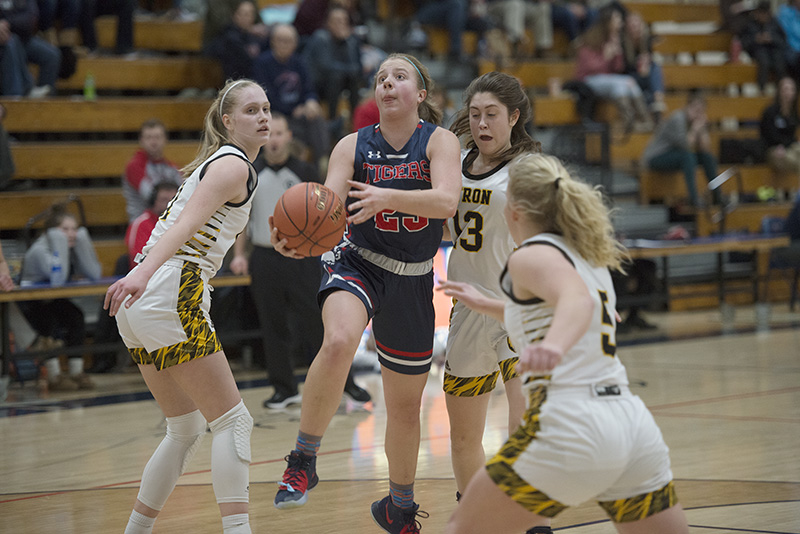 Senior Sam Skarstad takes off for a layup in Wednesday's section game against Byron. The Tigers won the game 66-58 and advance to take on Red Wing in the Section 1AAA semifinals. - Tyler Julson/Albert Lea Tribune

Despite a tied ballgame at halftime, the Tigers used a big second half to beat the Bears 66-58 and advance to the Section 1AAA semifinals.

Senior Sam Skarstad started out the game hot from beyond the three-point line, netting her first three attempts to give the Tigers a quick 9-5 lead. Sophomore Jordan Juveland then extended the lead with two straight baskets of her own.

The Bears slowly inched back into the game and, after tying the game at 18-18, went on a 10-3 run to take a seven-point advantage into the final two minutes of the  half.

Albert Lea used stout defense in the remaining minutes of the half and baskets from senior Ashley Butt and sophomore Annika Veldman to tie the game 28-28 entering halftime. 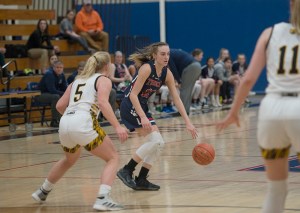 Sophomore Taya Jeffrey controls the ball early in the first half against Byron. Jeffrey scored 21 points in the win, 19 of which came in the second half. – Tyler Julson/Albert Lea Tribune

The Tigers got production from many players in the first half. Skarstad led with 11 points, while Juveland had five. Butt and junior Mallory Luhring each had three and Veldman, sophomore Taya Jeffrey and freshman Kendall Kenis each had two.

Coming out in the second half, both teams traded the lead in the opening minutes, then Jeffrey found her groove. Tied at 35-35, Jeffrey scored 15 of the Tigers next 24 points, giving them a nice six-point lead with under two minutes to go.

The Bears tried to come back but clutch performance at the free-throw line from Butt, Jeffrey and Skarstad sealed the victory for the Tigers.

Butt finished with nine points, while Juveland totaled seven and Kenis had five.

The Tigers improve to 10-17 on the season and advance to take on the Wingers of Red Wing Saturday night on the road.

The teams have met twice this season with the Tigers losing both.