Tigers hang on to beat Panthers 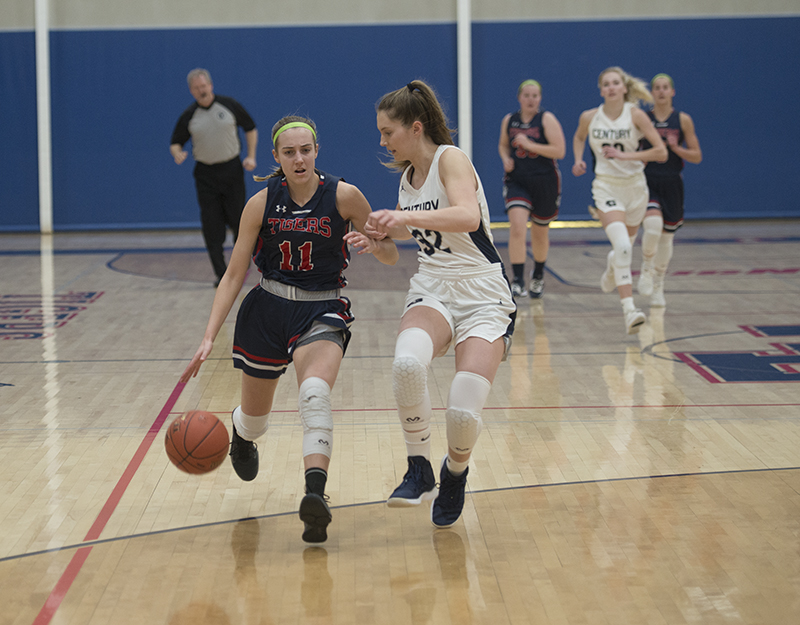 Sophomore Taya Jeffrey brings the ball upcourt Thursday night at home. Jeffrey scored 25 points in the game, 18 of which came in the second half. - Tyler Julson/Albert Lea Tribune

After a tough loss at the hands of Mankato East on Tuesday, the Albert Lea girls’ basketball team was back in action Thursday to host Rochester Century.

Despite a late comeback from the Panthers, the Tigers made some clutch free throws late in the game to hang on for the win, 53-47.

Aside from sophomore Annika Veldman, the all shooters got out to a slow start. Veldman scored the Tigers first six points and had a total of 10 in the first half.

“She took the shots,” said head coach Jason Thompson. “That’s one of the things we’ve been struggling all year with (Veldman), is getting her the confidence to come out and shoot. When she shoots, she’s one of our top three shooters percentage wise. It was great to see. Now we need to get it in the second half as well.”

Century was close behind Albert Lea for a majority of the first 10 minutes of action. Senior Sam Skarstad and sophomore Taya Jeffrey got into the offensive mix and soon had Albert Lea on top 16-8, forcing Century to call a timeout with 8:18 left in the half.

Despite the break in action, the Tigers continued to roll, extending their lead to as many as 13 points.

The Panthers went on a small run as the first half came to a close to trim the Tigers’ lead to six points before the break, 27-21. 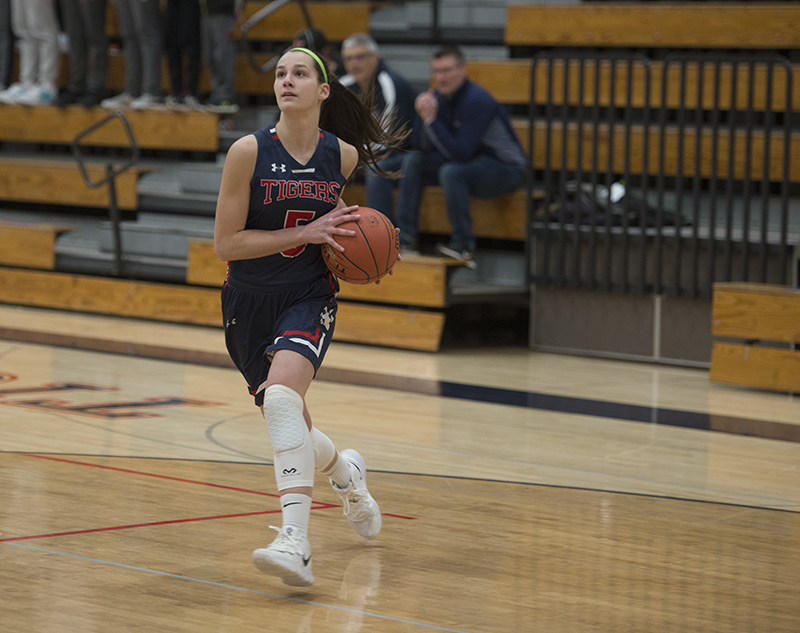 Sophomore Annika Veldman gathers for the game’s opening basket. Veldman scored the Tigers’ first six points and finished the first half with 10 in the 53-47 win over the Panthers. – Tyler Julson/Albert Lea Tribune

Veldman led all scorers with 10 points at the half. Skarstad had eight and Jeffrey had seven, while sophomore Jordan Juveland had two.

Albert Lea came out with a tremendous defensive effort in the second half, allowing only one Century field goal throughout the first 10 minutes of play. Jeffrey also provided a spark on offense, scoring nine of the team’s first 11 points of the half and finishing with 18 points in the second.

“I was not real happy with our defensive effort in the second half,” Thompson said. “We made a definite concerted effort and talked about it. Then the girls came out and responded really nicely.”

Midway through the half, the Tigers were leading 42-27. However, the Panthers were not giving up just yet. Over the next five minutes of gameplay, the Panthers went on a 12-1 run, cutting the Tigers’ lead to just four points.

Big free throws from Jeffrey extended the lead again, but Century hit a big three-point basket to narrow the lead to a single possession. After two costly turnovers by Century, Skarstad and Jeffrey hit the free throws that would seal the game.

“That’s one thing we struggle with a little bit, is when we try and force things too much and we just panicked a little bit,” Thompson said. “I called a timeout and said, ‘Let’s settle down a little bit, don’t panic and let’s just make our passes.’

“I got Taya and Sam, my two best shooters on the close to 80%, on the free throw line. I like my chances. Taya missed a few more than I would like there, but she came through when she needed to and Sam hit a couple big ones there at the end.”

The Tigers move to 8-14 on the season, reaching the total-win goal they set at the beginning of the season. They will be back on the court Friday night with a game on the road against the Rockets of John Marshall.