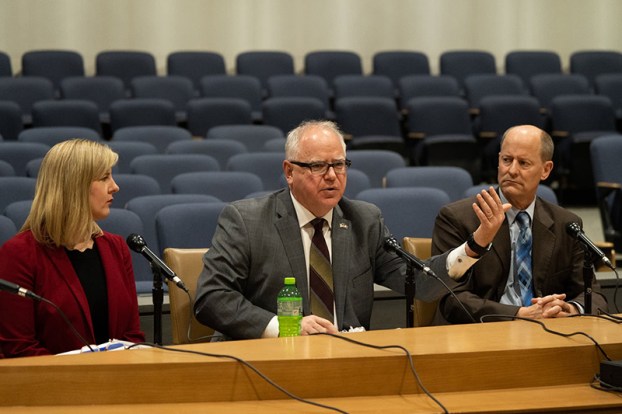 What to watch at the Minnesota Legislature this week

This week might seem like a bit of a re-run for observers of the Minnesota Legislature. Several bills that commanded attention from lawmakers last year are on committee dockets again.

The rebooted bills are almost certain to run into similar obstacles in a Legislature where the House and Senate are controlled by different parties. But debate over them will help tee up what voters will hear during the fall campaign.

Some of the bills getting another run up the flagpole:

• Paid family leave. A bill to provide up to 12 weeks of paid time off upon the birth or adoption of a child or to care for an ill relative passed in the House last year and went nowhere in the Senate.

• A pair of gun bills. One measure makes more transactions subject to background checks and another allows for easier revocation of firearms from people deemed a threat. Again, both made it through the House but not the Senate.

• “Conversion therapy” ban. A practice where a mental health professional attempts to change a patient’s sexual orientation or gender identity through counseling would be banned for youth and vulnerable adults. That bill won House approval and narrowly fell short in a Senate vote.

The balance of power in the Legislature — DFLers run the House and Republicans lead the Senate — hasn’t changed this year, so why are bills that got nowhere last year getting another push?

It’s an election year, and these types of bills serve the purpose of revving up the respective party bases — or are aimed at those crucial swing voters.

House Speaker Melissa Hortman, DFL-Brooklyn Park, said when the House tried to pass these bills last year, “we heard the excuse of ‘not in a budget bill, not in a budget year,’” she said. “Well, it’s a policy year. They’ll get standalones.”

The Senate also had bills that passed last year but didn’t move in the House, such as new restrictions on abortion or penalties for interfering with pipeline construction.

Lawmakers will get a chance to consider some new policies, though. They include a constitutional amendment to establish the “right to a quality education.”

The amendment is aimed at addressing educational disparities. The proposal calls for a “uniform system of public schools.”

Big names are pushing for the change. Former Supreme Court Justice Alan Page and Minneapolis Federal Reserve Bank president Neel Kashkari say that constitutional language doesn’t go far enough to assure that all children are positioned to succeed. They cite a persistent achievement gap between white students and students of color. Page and Kashkari will appear Monday before a Senate committee to lay out their vision.

It could be a long shot. It would take passage by the House and Senate to get the amendment to the ballot this fall. While Page and Kashkari say a constitutional rewrite would refocus the debate, there are a lot of people who aren’t quite sure what the amendment would do in practice.

A sampling of other hearings to watch at the Capitol this week:

• Legislative sign-off for Sentencing Guidelines Commission members. Political appointees to the Minnesota Sentencing Guidelines Commission would face Senate confirmation under a bill by Sen. Warren Limmer, R-Maple Grove. It follows a recent commission action to cap most probation lengths at five years. Limmer, who chairs the Senate judiciary and public safety committee, strongly opposed the move. Limmer said the change is needed now that the commission seems to be “making policy that should be made in this body, in the Legislature.” Gov. Tim Walz has said he would never sign the bill if it passed. The hearing takes place at 1 p.m. Monday in the Minnesota Senate Building.

• COVID-19 update. A Minnesota Senate panel will hear from Minnesota Department of Health officials about preparations for the new coronavirus that hasn’t yet surfaced in Minnesota but is as close as Wisconsin. The hearing takes place at 3 p.m. Tuesday in the Minnesota Senate Building.

• Primary voter data privacy. A House panel will hear a proposal to address concerns about the sharing of information about who voted in Minnesota’s presidential primary and for which party. The hearing takes place at 9:45 a.m. Tuesday in the Basement Hearing Room in the State Office Building.

• School shootings and vaping. The House education policy committee will hear about research on how to prevent mass shootings in schools and will also hear two bills related to preventing vaping among youth. The hearing takes place at 2:30 p.m. Tuesday in Room 5 of the State Office Building.

ST. PAUL — The top Republican in the Minnesota Senate said Monday that he’s optimistic about his party’s chances for... read more