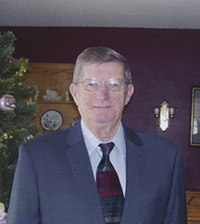 Bill grew up in the Hollandale area, but in 1954 he decided to spread his wings and joined the United States Army, where he was part of the Korean War. Upon returning to the United States, he met the love of his life, Patricia Lund.

On April 2, 1957, Bill and Pat were married at First Baptist Church in Clarks Grove. Bill tried his hand at farming for a few years, but decided this wasn’t the right career path for him, so he chose to go to work for Ravenhorst Concrete in Clarks Grove. He worked there for many years and when they decided to close the business, he went to work doing various jobs in sales. During his retirement years he liked to help with fall field work for area farmers.

Bill and Pat enjoyed traveling — going on a cruise, spending lots of time in Branson, Missouri, going to Arizona and Texas, just to name a few. They also did lots of volunteering for different organizations, which took them to different parts of the country. Many evenings were spent with friends, as Bill and Pat enjoyed playing board games and cards. Bill was a member of Hollandale Reformed Church and volunteered doing different activities within the church.

He loved going fishing. Many family vacations were spent up north on fishing trips. He also enjoyed mowing his lawn and doing yard work. There was never a blade of grass out of place on his lawn! He liked doing woodworking and most recently building small, wooden cars for kids. He was also a fan of watching the Minnesota Twins and Vikings.

A big thank you to the staff at Mayo Hospice and Good Samaritan Society of Albert Lea for their care these past few weeks.