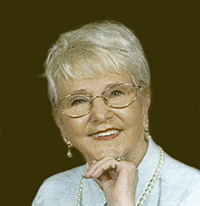 One of 11 children, she grew up in Kiester and attended high school in Rake, Iowa. She was a member of Trinity Lutheran Church in Thompson.

Wilma was married to Donald Hauge and they divorced after 25 years. She was a waitress in Minneapolis for 32 years.

On Jan. 5, 1976, she married Donald Thompson. They enjoyed living in Kerrville, Texas, where she was an active member of Zion Lutheran Church.

Willi enjoyed playing golf, dancing and traveling. Her favorite places to visit were Norway and Alaska. She was skilled at sewing and would make some of her own clothes. Willi was very fond of her nieces and nephews, never having children of her own.