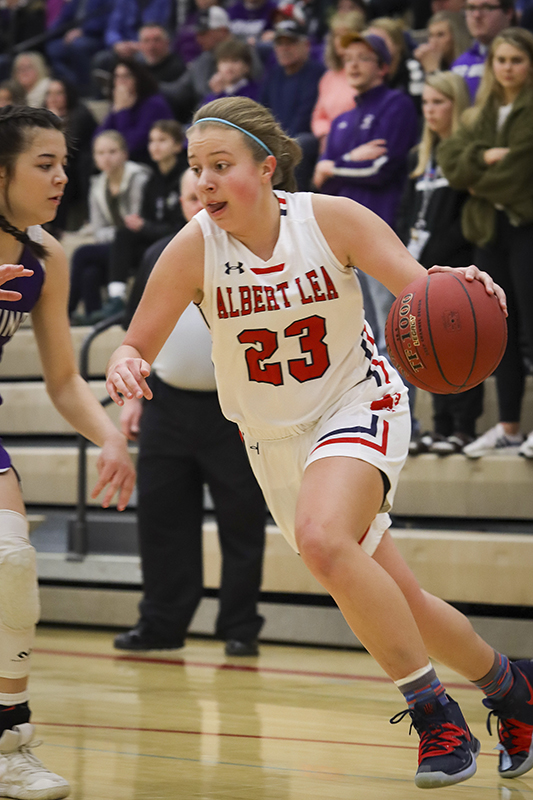 After winning its Section 1AAA quarterfinal last Tuesday night, the Albert Lea girls’ basketball team traveled to Red Wing Saturday for a matchup with the No. 1 seed in the section.

Despite a strong showing the first half, the Tigers could not keep the Wingers down for long, falling 63-24.

A staple in the Tigers offense, Sam Skarstad was held to zero points in the game.

“Red Wing really came out to play, they jumped on us early with some good defensive pressure that we didn’t handle very well,” said head coach Jason Thompson. “Coming out in the second half, again, we just had way too many unforced errors, turnovers and we shot very poorly in the second half. That’s a combination that you never want.  Red Wing played like a No. 1 seed — you have to tip your hat to them the way they played.”

The Tigers end their season with a record of 10-18 and will lose seniors Skarstad and Butt to graduation in the spring.

Skarstad was also named to the Big Nine All-Conference tea, and Jeffrey was named an honorable mention.

“We met a lot of our team goals that we set at the beginning of the season,” Thompson said. “But, we still have plenty of work to do.  One of the main things that we did this year was set a culture of winning.  The expectations are now raised going forward, knowing that we can play with any team in the Big Nine and compete for one of the top spots in the conference.”