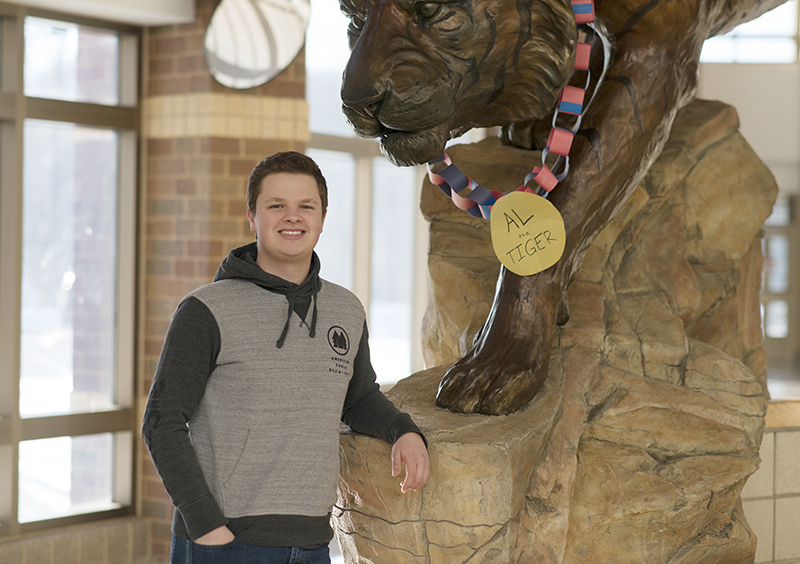 Albert Lea junior Aaron Farris is the 2020 recipient of the Junior Citizen of the Year Award. Farris is the secretary of the Freeborn County Republican Party and the 1st Congressional District Republican Party. At school, Farris is also a member of the student council and is the junior class school board representative. - Tyler Julson/Albert Lea Tribune

In the first year of the award, Albert Lea High School junior Aaron Farris has been named the 2020 Albert Lea Junior Citizen of the Year.

Farris has taken on many responsibilities, both at school and in his personal life. At school, Farris was elected to the student council and serves as the junior class school board representative.

Farris is also heavily involved in political groups outside of school as the secretary for both the Freeborn County Republican Party and the 1st Congressional District Republican Party. Not only does Farris take notes and send out the agendas for all of the group’s meetings, he also helps organize caucus events and participates in many parades for various candidates throughout the district, which spans from the South Dakota to the Wisconsin border, and from the Iowa border and north about 80 miles.

Farris took an interest in politics from a young age and was elected as the youngest person to hold a position in either party in Minnesota’s history. He talked about what makes him so passionate about politics.

“One thing that I don’t like is just sitting there and complaining about things and not doing anything or feeling like you can’t do anything about it,” Farris said. “I’m very grateful I’ve been given the trust that I have. A lot of people might not really trust a 16-year-old — which is how old I was when elected — to do this kind of stuff. It is a fun job. It might sound boring at times, but it is extremely fun. I get to meet some pretty incredible people.”

Farris said he was always intrigued by politics and enjoyed learning about all the different political processes. He first started getting involved by signing up to be a volunteer with the Freeborn County Republican Party and worked at a booth at the Freeborn County Fair. He said the experience at the fair is what got him into the idea of running for a position on the party board.

Farris said his favorite part about being involved with so many groups is his ability to talk with people. Even with people who might not share his political views or who don’t talk politics at all, he enjoys having a good conversation with people.

While Farris takes on a number of responsibilities within his roles, according to Angie Hoffman, one of Farris’s nominators, he completes all his tasks remarkably well.

“Whatever task Aaron takes on, you can be guaranteed it will be done exceedingly well,” Hoffman said. “He truly is one-of-a-kind. … Our county party unit is viewed as one of the top Republican Party units in the state and that is largely due to Aaron’s leadership.”

In his free time, Farris likes to read books and newspapers, especially works that are politics-related. He also recently finished watching “The West Wing” on Netflix. Farris enjoys writing and spending time with his dog, Remy.

As for Farris’s future, he is thinking about going to Minnesota State University-Mankato for marketing, but ultimately wants to return to Albert Lea.

“I love Albert Lea,” Farris said. “It’s a nice distance from all the big cities. It has that small-town feeling, even though you have about 18,000 people. I really like Albert Lea, and I want to live here.”