An area woman is slated to leave Saturday to serve as a nurse on the front lines of the COVID-19 pandemic in New York City. 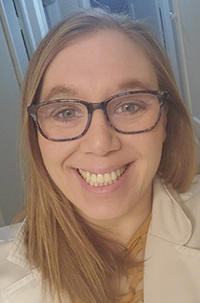 Elizabeth Schafer, who is from Albert Lea but who now lives between Albert Lea and the Twin Cities, said she will be working through staffing firm Prime Staffing for 14 weeks after she had numerous recruiters reach out to her asking her to join their agency and go out to different sites as a traveling nurse.

“You take an oath to do no harm and to show up every day no matter what with a smile on your face … to take care of the sickest of sickest patients, so that’s what I’m doing,” she said.

Schafer said she had recently signed a contract to work as a nurse in an operating room, but because operating rooms are presently shut down because of the pandemic, she knew she needed to find something else. She is part of various traveling nurses groups on Facebook and has her resume out on sites such as LinkedIn.

She will travel with a nurse from Kansas she met through one of her groups, and she has signed on to work in intensive care, telemetry and medical-surgical units.

She has to work a minimum of 48 hours per week but has signed a double contract, which will allow her more hours and the capability of working seven days a week at two hospitals.

She said going into the situation, she is aware there is not enough personal protective equipment for health care workers and has been told she will likely have three to four patients she will oversee at a time, each on multiple IV drips, which is at least double the number of patients nurses regularly would oversee at a time.

She said as of Sunday, over 3,000 nurses were being recruited for the area — 1,000 of those were through the Federal Emergency Management Agency.

“Every agency is being bombarded with requests based on their size,” she said. Companies are recruiting staff from all over the country.

She will receive a stipend for a portion of her housing at a hotel, but otherwise will pay expenses including a subway or bus pass and food.

Her two children will stay at home with their father, and their grandmother, who is a retired teacher, will come and help with their schooling.

Schafer said she plans to document her experience daily for people to follow.

“My goal is to share what we go through on the front lines and at the end of the day what we learn from it,” she said.

She encouraged people in Minnesota to stay home if at all possible. She said Minnesota is about three to six weeks behind COVID-19 hotspots such as New York and California.

“We have not even begun to see what we’re going to see,” she said. “People truly do need to be prepared for this. It’s going to come.”

She noted Minnesota is lucky to have numerous large hospitals in the Twin Cities who are presently mapping out where COVID-19 patients will be treated. States like New York and Washington weren’t as lucky and didn’t have the time to plan.

“There’s so much to be learned from this experience,” she said.