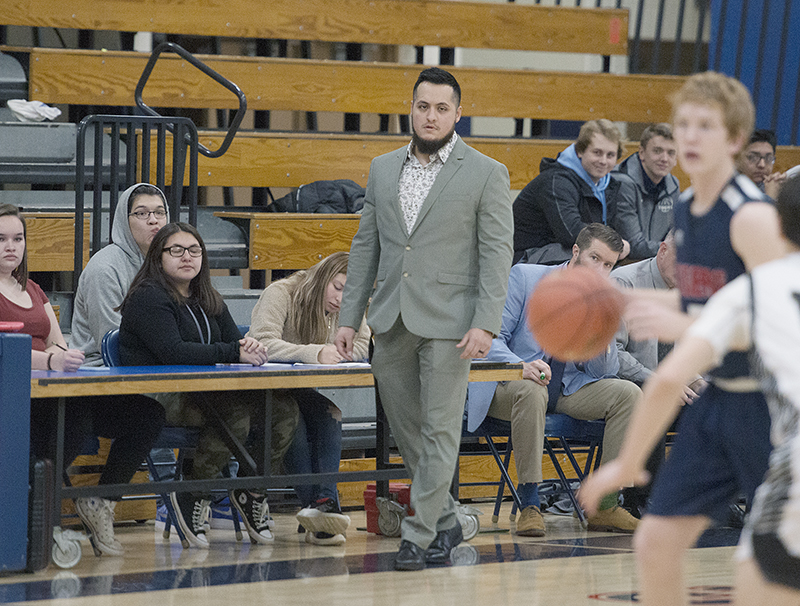 Behind the play of a talented group of seniors, first-year head coach Lantt Benavidez led the Tigers to their best season in 15 years, earning him this year’s Tribune Boys’ Basketball Coach of the Year.

The Tigers finished the season with a 13-13 record, the first time they have been at .500 or above since a 15-14 finish in 2004-05. They were also set to play in their first section championship game since 2005-06 until the season was cut short due to growing concerns about COVID-19.

Through all the success this season, Benavidez said all the credit goes to the players and the years of hard work they have put in. According to Benavidez, the talent has always been in the program.

“The players deserve all the credit,” Benavidez said.“They have been putting in the work for a long time. They have worked hard in season and in off-seasons. They struggled through some really rough seasons, and for them to stick with it and have the season they had is just amazing.”

Those rough years had taken a toll on the mindset of the players, and that started to change as the season progressed. Benavidez said the boys started playing with passion and a love for the game. They now had a chip on their shoulders and went into every game they played expecting a win.

Another big difference Benavidez noticed from the beginning of the season to the end was elite defensive play. He said the team came into the season with the main focal point to play elite defense, and it became a source of pride when the team would make big plays defensively and have good all-around games.

At the team’s preseason meeting, the Tigers set a few goals, but Benavidez said the main goal was to host a section tournament game. They achieved that — twice.

“We have had a ton of success as a team,” Benavidez said. “The players, as individuals, and I believe that Albert Lea basketball has finally gotten the confidence it needed to move forward. Each year is a brand new story, with new guys and new obstacles. We’re going to continue to work hard and develop our players’ talents and build from this season.”

The development of younger players will be a play a key role in the future of the program as the team graduates nine seniors from the roster, many of whom played a large part on the varsity lineup. Big Nine All-Conference player Chay Geun and honorable mentions Koby Hendrickson and JJ Mucha-Owens are among those players leaving. Other seniors include Andrew Willner, Logan Howe, Caden Gardner, Derrick Overland, Ismael Cabezas and Connor Veldman.

Despite losing a large portion of this year’s team, Benavidez is confident the team will continue to build off this year’s success. He said his coaching staff has done a great job with developing and connecting with the underclassmen teams, and they are currently working on an off-season program that will work on the development of young talent and keep the team moving forward.

“The next step for us is to continue to develop and grow,” Benavidez said. “Develop our feeder programs so our future players are strong and understand the basics and fundamentals of the game.

“We are losing a ton of seniors, but I still feel confident that the guys we have on our roster will step up and continue to improve day in and day out. I’m excited for the future of Albert Lea basketball and can not wait to get on the court with our guys.”