Betty Ann (Johnson) Blankers was born Feb. 22, 1936, to Mike and Dena (Addengast) Johnson in Ashton, Iowa, during the cold snowy winter. She attended country school K-8 at Gilman No. 4. She graduated from Ashton High School in 1954. 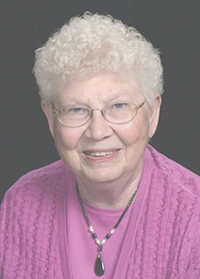 She attended business school in Sioux City, Iowa, where she met her husband, Robert Blankers. They were married in Ashton on June 14, 1957.

She worked as a film printer at Elko Photo in Sioux City, a waitress at Highway Café in Hospers, Iowa, and retired from Owatonna Tool Co. Robert and Betty lived in Canby, where their three children were born. She has lived in Sioux City; Canby; Lincoln, Iowa; Schaller, Iowa; Hospers, Iowa; Northwood and Owatonna.

She was a devoted wife, mother, grandmother and great-grandmother. She was a gracious hostess and always had coffee/tea and goodies to serve. She volunteered and served in the church and community wherever they lived. She was part of Presbyterian church circles and Bible studies. She enjoyed baking, doing puzzles, playing Chinese checkers and solving sudoku puzzles. She enjoyed knitting, and she knitted an afghan for each of her children and for each of her grandchildren’s high school graduations. She also knitted baby blankets for each great-grandchild. She enjoyed watching sports events of all kinds, especially the Minnesota Twins and Vikings.

Services in Hospers Iowa are as follows: Public visitation from 3 to 4:30 p.m. Saturday at Oolman Funeral Home in Hospers with a prayer service at 4:30 p.m. with Dr. Brian Janssen officiating, immediately followed by burial at Hospers Cemetery and concluding with a dinner at First Presbyterian Church in Hospers.