Delores Jean Redman’s Mass of Christian burial service has been postponed until Minnesota public gathering bans have been lifted. The family thanks you for your understanding at this critical time everyone is facing. Funeral services will be in the future and information will be updated at a later date.

Bruss-Heitner Funeral Home in Wells is assisting the family. To leave an online condolence, visit www.brussheitner.com. 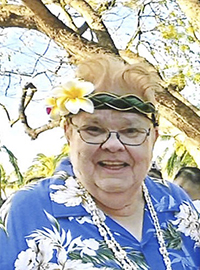 Delores Jean was born Feb. 1, 1944, the daughter of Joe and Hattie (Pilacyznski) Parker.

She was united in marriage to Clifford Redman on Dec. 1, 1962, at St. Casimir Catholic Church in Wells, and to this union seven children were born.

Delores was a strong Christian. She loved spending time with her children, grandchildren and great-grandchildren. She enjoyed playing cards and spending time with family and friends. Delores never forgot a birthday or an anniversary of her loved ones. She was a member of the Freeborn American Auxiliary and very involved with volunteering at St. Casimir’s Church. She was a good caregiver, not only to her children, but also devoted her life to caring for her husband.