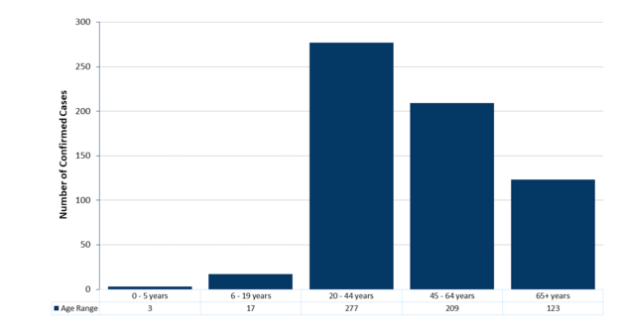 Information from the Minnesota Department of Health

Twelve people have died, and 629 people have tested positive for COVID-19 in Minnesota as of Tuesday, according to numbers released by the Minnesota Department of Health.

The department said out of all of the confirmed cases, 112 patients have required hospitalization, and 56 remain hospitalized as of today, with 26 being hospitalized in intensive care.

The number of overall confirmed cases was an increase by 53 from Monday to Tuesday, with positive cases confirmed in people between 5 months and 104 years of age. The median age of people affected is 46.

The agency states 19,780 tests have been completed, including 8,104 from the Minnesota Department of Health’s public health lab and 11,676 from external laboratories. The department states not all cases of COVID-19 are tested, so it is not representative of the total number of people in Minnesota who have or had COVID-19.

The county with the highest number of confirmed cases was Hennepin County at 204, followed by Ramsey County at 56 and Olmsted County with 53.

Freeborn County has not had any confirmed cases, according to the department.