‘God will be here’ 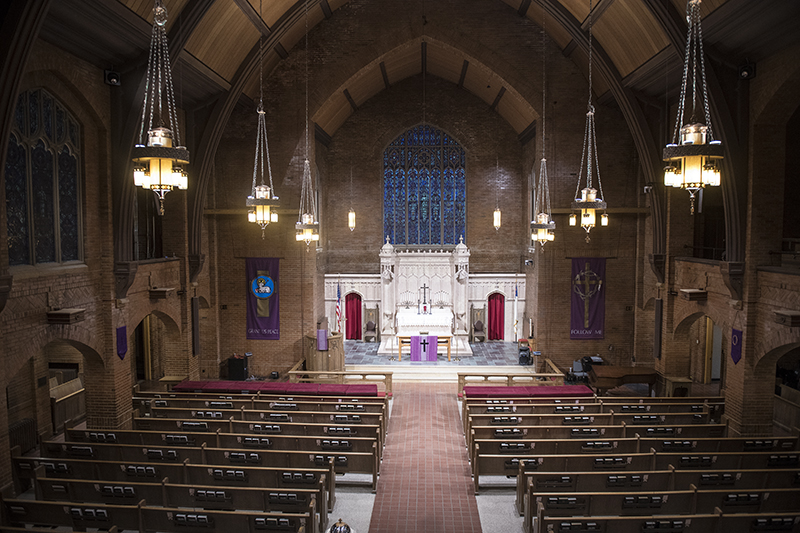 Church sanctuaries, such as the one at First Lutheran Church in Albert Lea, pictured, sit empty of worshippers during usual services as public gatherings are prohibited amid the COVID-19 pandemic. - Colleen Harrison/Albert Lea Tribune

The Rev. John Holt of First Lutheran Church is delivering his sermons this week to an empty sanctuary.

As part of the ongoing effort to curb the spread of COVID-19, Holt and several other religious leaders at churches in Albert Lea are moving their church services online, while others are trying other means to reach their members or are temporarily closing.

Holt said Wednesday he had recorded his mid-week Lenten service with plans to post it on the church’s website and would utilize its TV broadcast known as Peace & Power on KAAL-TV and KATE Radio for its Sunday service.

“We do it out of a motivational love for our neighbor,” he said. “We’re trying to keep it from spreading — that’s why we decided we’re just going to go virtual for a couple weeks.”

Health authorities have asked people follow social distancing guidelines, including keeping six feet away from each other. Minnesota Gov. Tim Walz has discouraged meetings of more than 50 people and gatherings of any 10 people who are considered at-risk.

Bishop John M. Quinn of the Diocese of Winona-Rochester on Wednesday announced all public Sunday and weekday Masses would be suspended for the next eight weeks through May 15. On or before that date, a decision will be made to continue or to lift the restriction.

“The decision to suspend public Masses is the most difficult decision I have ever made,” Quinn said in a statement. “It is based on my desire to protect our people as advised by public officials and health care experts. By not coming together and having personal contact, we hope to limit the spread of the COVID-19 virus.”

The statement said priests will continue to offer daily a private Mass for the intentions of their parishioners, and churches may remain open for private prayer.

Funeral masses, baptisms and weddings will continue, but only a small number of immediate family members may attend. A Sacramental ministry will be available on an individual basis.

He encouraged people to take advantage of the many Masses broadcast on radio and television.

Eileen Woyen, pastor of Trinity Lutheran Church, said all services and activities have been suspended at her church building, as well, aside from its weekly community meal on Wednesdays.

The church is offering its services online through Facebook, in addition to a daily devotion.

She said she and others are working on having the other members calling each other regularly to check in with each other and see if they need anything in the coming weeks.

Instead of offering the hot meal as in the past, church members are passing out a bagged meal with items such as a sandwich, chips and carrots on Wednesdays.

Meals are passed out at the back office door, rather than allowing people into the building for safety.

Woyen said though the church has been used to serving food leftover from funerals or other church events during the meal, it is now looking for donations for items needed to make sandwiches, as well as bags of chips, baggies or raw fruits or vegetables.

She said parishioners have responded positively to the changes, noting that many of the changes were put in place to protect the congregation’s older members.

How long the changes will last is still up in the air.

“God is here, and God will be here,” Woyen said “We rest on our faith that God is present in good and bad, and God is bigger than even COVID-19.”

In addition to posting its service on Facebook and streaming midweek Bible studies, Albert Lea Assembly of God Church is trying something a little different with a drive-in church service.

Ryan Quigley, pastor of the church, said the plan is for people to drive up in their cars, with all cars facing the same side of the building, and he will give the message from on top of scaffolding as people listen in from their cars.

“It allows us to meet without meeting,” he said.

Quigley said he thought it would be fun and encouraging for his parishioners to still be able to get out of the house but not compromise other peoples’ health.

“It allows us to still have our same meeting times and kind of in a way keep some semblance of normalcy in this time,” he said. “With so many people’s concerns with the virus and how there’s a lot of anxiety and uncertainty, finding unique ways to boost morale and make things fun and exciting is the goal with that.”

People can still see the other people from the church — just from a distance.

He said depending on the response to the service this week, he will determine whether he does it that way more Sundays.

At this time of uncertainty, Holt encouraged people to trust in the Lord and to call their pastors if they are feeling blue or isolated or if they have any needs.

Several pastors met together Wednesday morning to talk about how they can all together help the community. They are concerned about people with mental health concerns, people who are shut-in and the youth who might not be able to resume the school year in person.

“We’re all in different churches and denominations, but we all want to help people,” Holt said.