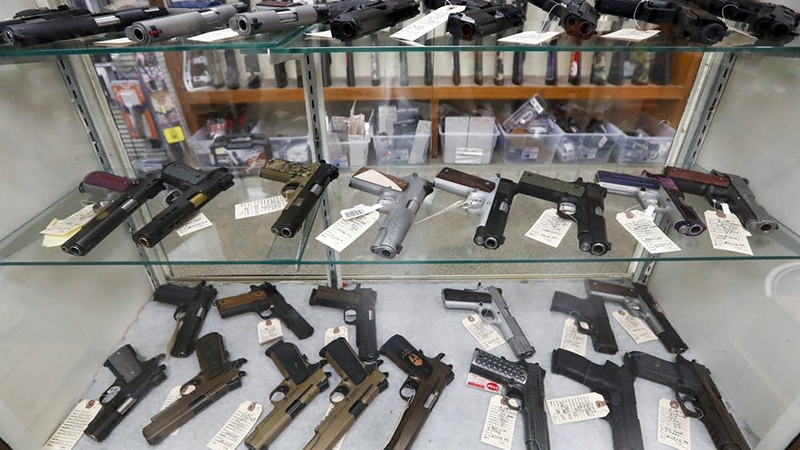 Spikes in gun sales typically follow mass shootings or the elections of presidents who are Democrats, as gun owners fear government restrictions on future firearms sales.

But first-time gun buyers are fueling a recent surge in Minnesota gun sales. And the coronavirus pandemic is the main reason for their purchases, said John Munson, a gun store owner.

“A lot of new buyers that don’t own firearms are saying, ‘hey, I’ve got to stay at home. I’ve got to plan for two weeks,’” said Munson, owner of Bill’s Gun Shop, which has three stores, including one in Hudson, Wis. “They’re looking at the worst-case scenario, saying, ‘maybe now is the time that I would want to pick up a firearm to defend myself or my family at home.’ ”

Munson said his stores saw “extreme numbers of people coming through the doors” during a recent weekend — 1,300 to 1,400 people per day. He said that’s probably three times the sales he’d normally see at this time of year.

The higher demand for guns comes at the same time Munson is short-staffed. About a dozen of his 85 employees can’t work because of their vulnerability to the virus or out of concern for their health. And the store employees who remain on the job are also making sure to enforce social distancing protocols in the stores and on the gun ranges.

Munson said he always encourages gun buyers to take in-store safety courses. However, those classes won’t be available for a while.

“We’re putting all classes on hold until May 1,” said Munson. “Simply because we don’t have the resources to operate the shop in its full hours, in its full capacity.”

The National Rifle Association has announced that first-time gun owners who need training during this time can access its YouTube channel promoting “mentor videos” with gun safety basics, maintenance and storage tips.

To buy a pistol or a semi-automatic assault style rifle in Minnesota from a gun store like Bill’s Gun Shop, a person has to have either a permit to carry a handgun or obtain a permit to purchase. County sheriffs issue permits to carry. Permits to purchase are available through local police departments — or in smaller communities, sheriff’s offices.

Minneapolis police have seen a 35 percent increase in permits sought during the first three months of this year compared with the same period last year.

St. Paul has seen the number of permit applications rise from an average of four or five per day to more than 30 per day.

In Brooklyn Park, there has been a nearly 200 percent increase in purchase applications so far this month compared with all of March 2019.

Brooklyn Park Police Deputy Chief Mark Bruley said the vast majority of those permit applications are being made by people who have not applied for a permit to buy a gun before.

“I think as people struggle with the fear and anxiety of the pandemic and what that means, I think people are dealing with it in different ways,” said Bruley. “I don’t think I totally understand why we’re out of toilet paper and why we’re buying that en masse, but I think people are just trying to deal with it in their own way. And for some reason, some people feel the need to have a gun.”

Bruley said residents shouldn’t be afraid that the police department will not be able to help them in a time of need. Right now, he said calls for service are at normal levels.

Bruley said he supports people’s Second Amendment rights to own guns. But he wants to make sure people — especially first-time gun buyers — are prepared to take on the responsibility.

“I don’t want them to minimize how important it is to make sure that gun is secured; that they know how to handle it; and that they keep it away from children or people that should not have access to that gun,” said Bruley, who adds that an improperly stored gun is more likely to be stolen than to be used in self-defense.

Recently purchased a gun? We’d like to hear from you

There are other risks associated with having guns in homes.

A gun in the home is also associated with higher risks of suicide and domestic homicide.

And according to the Centers for Disease Control and Prevention, 60 percent of gun deaths are the result of suicide. In Minnesota, 4 out of 5 gun deaths are suicides.

“Access to guns does increase the relationship with suicide,” said Sue Abderholden, executive director of the National Alliance on Mental Illness Minnesota.

Abderholden said she wants people to be extra careful about bringing a gun into the home right now.

“We have more children at home. Kids are not in school right now,” said Abderholden. “We have increased depression and anxiety among our population. So, you want to make sure gun storage and restricting access to lethal means is also happening at the same pace.”

Abderholden recommends to remove the guns from the home entirely if someone in the home is experiencing depression.