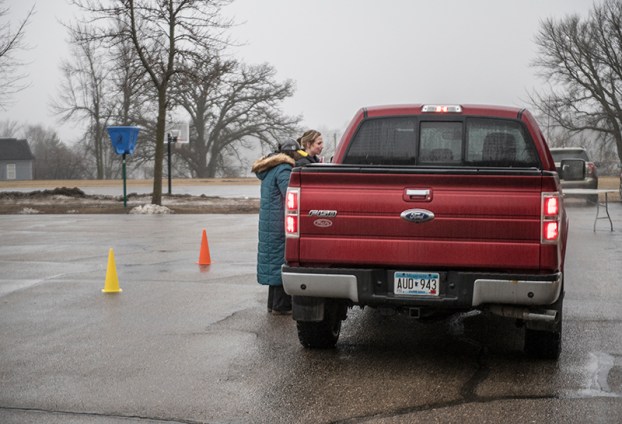 Parents and their children are expected to go to their respective Albert Lea schools Wednesday and Thursday to get their personal items and materials for distance learning. - Colleen Harrison/Albert Lea Tribune

‘It was a full team effort’

Albert Lea Area Schools teachers and administrators started distributing distance learning plans on Wednesday to parents and students at schools in the district as schools across the state shift from traditional teaching methods amid the COVID-19 pandemic.

Distribution was slated to continue Thursday with distance learning planned to begin on Monday.

Lakeview Elementary School Principal Nick Sofio said it had been a busy week and a half since teachers and staff were tasked with the duty to prepare plans for the nontraditional teaching methods and he credited the coordinated teamwork between teachers, paraeducators and other staff to making it possible.

“It was a full team effort,” Sofio said.

He said there was a line of eight or nine cars already at the school when the distribution kicked off at 7:30 a.m. Wednesday. Parents were given the option of a drive-thru method or going inside the school to collect their belongings and learning plans. There were symptoms inside to honor social distancing, Sofio said.

The principal said though teachers have been busy preparing plans, it has also been an emotional time for them as they transition into this next phase, particularly in the fact they are not able to say their goodbyes in person.

“It hit us starting last week that there’s a possibility we’re not coming back,” he said.

Minnesota school officials on a call with the state Education Department were told K-12 public schools will be directed to close until early May under an order from Gov. Tim Walz Wednesday afternoon.

“Our biggest emotion is sadness — overwhelming sadness and frustration in not being able to say goodbye,” said kindergarten teacher Beth Nelson.

Nelson said she is sad to think about what the students will be missing in their learning, though teachers have tried their best with distance learning plans.

“These kids deserve to have this full education,” she said.

Teachers have had to adjust to what she described as essentially a whole new job description, keeping in mind not only how to teach differently but also how distance learning is going to be for the families of their students.

She said she has thought about her kindergarteners who haven’t learned to read yet, and who may not now learn to do so this year because of the changes. She also struggles with how to implement those social skills that kindergarteners learn a lot about at that level.

The school is providing hotspots for families that didn’t have internet, and the teachers are also looking at different apps for communicating with parents. They reminded parents to contact them with questions and concerns.

Durbahn said the media center is providing each student with three to five books to take home, and each teacher also prepared books from the classroom to take home.

The teachers said the teachers have been given the choice of whether to work at home or at their normal buildings and will be available to help as needed.

“The big thing is we miss our kids,” Durbahn said.