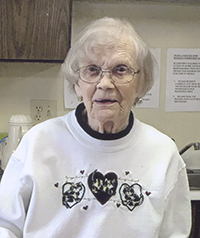 Memorial services will be at 2 p.m. Friday at Bonnerup Funeral Service in Albert Lea with visitation one hour prior.

Joann Rosella Okland was born Dec. 3, 1939, to Adolph Sr. and Clara (Handeland) Okland in Lake Mills. She was the second-oldest of four children.

She attended school at Northside Elementary and Central High School in Albert Lea. After school she married Floyd Carlson and worked at Land O’Lakes.

Joey worked later in life at ABC Bingo in Austin and enjoyed many years playing bingo. Joann was a lifelong member of Our Saviors Lutheran Church and enjoyed time with her nieces and nephews. She preferred her own cooking and coffee compared to anyone else’s, had a witty attitude and always took her trips “down South!”

She is survived by her siblings Adolph “Sonny” Jr. and Carol (Gary) Engelby; lifelong friends Gloria Peterson and Sandy Vandegrift; close friends from the senior. Tower; and by other loving nieces, nephews, great-nieces and nephews, relatives and friends.

“We will all miss Joey very much!” her family and friends said.