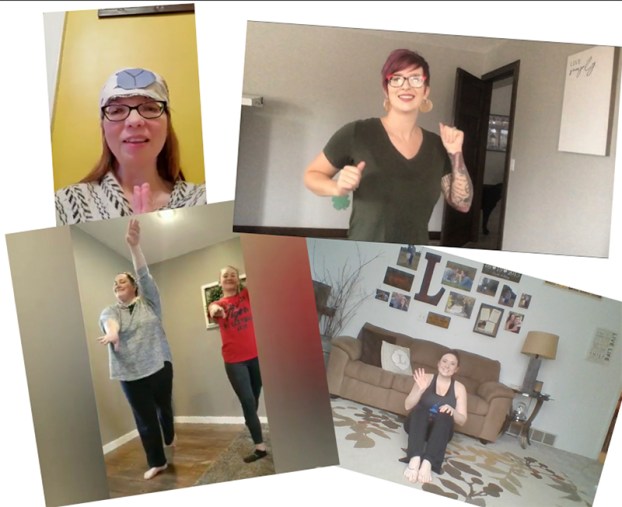 Clockwise, from top left: The Meraki Studios teachers Peggy Benson, yoga and mediation; Holly Karsjens, littles dance; Heather Sadauskis, ballet dance; and Amy Leesch, jazz dance and stretching, have taken their classes online for students as the studio shut its doors to the public amid the COVID-19 pandemic. - Provided

‘Keeping morale up and keeping the positivity’

Holly Karsjens saw a need to support the arts in Albert Lea five years ago, and The Meraki Studios was born. Now in the midst of the coronavirus epidemic, she and other Meraki instructors are taking their lessons online to reach a community in quarantine.

“We thought if there was any way we could try to positively boost morale because that’s kind of something that we think is super important right now,” Karsjens said. “Just keeping morale up and keeping the positivity, which is what we push at the studio anyways within our walls. So if we could somehow continue that positivity through their computers or their phones by getting to them at home and keeping morale up, that was kind of our goal.”

Karsjens is the founder and a dance instructor at The Meraki Studios, which also offers yoga, meditation, martial arts and other workshops and lessons. Last week she and other instructors began posting videos of their various routines and exercises on The Meraki Studios’ Facebook page to stay in touch with their hundreds of students, ranging in ages from 2 to over 70.

“My viewpoint for this specific situation, this predicament that we’re all in, is showing people and especially kids that you’re also in your living room and you’re in your sweatpants, too, just like they are,” Karsjens said. “Doing it on your phone shows a little more realistic approach in production so that it comes off like, ‘I’m just like you, I’m stuck at home too, and I just got my iPhone or laptop to record stuff on.’ So I’m basically saying it’s OK with bloopers, it’s OK with looking more live and a bit more real.”

Karsjens has asthma and, following a previous bout with pneumonia, she questions the strength of her immune system. Living in the country allows her to get outside with her dogs when the weather permits, but she feels with her lungs vulnerable, she will try to stay out of the city for her sake as well as others’.

“I do think some fresh air and some light helps keep the morale up, but I have been trying to stay home — not only for my own safety but just understanding that you can be a carrier. Trying to protect everyone else in our community is super important to me, too.”

Elsewhere in Albert Lea, other instructional businesses are also taking their classes online. Joe Tscholl, who owns and operates Snap Fitness with his wife, Mollee, has been spreading the word on social media that Snap is offering free exercise classes to members and non-members alike for 90 days. Mollee Tscholl has also been posting videos of exercises with everyday objects you can find around the house on the Albert Lea Snap Fitness Facebook page.

“Guests can sign up for it as well, so it’s not just us but everybody that is needing that outlet to get a good workout and get some exercise in since all the health clubs closed for the time being,” Joe Tscholl said. “We’re just praying for the community and not only members but everybody out there. I know that we’ll get through this and for everybody to have faith and hope in this troubled time.”

Snap Fitness classes can be accessed by downloading the app at snapfitness.com/freeapp.

Another name in Albert Lea offering free online classes locally is the Albert Lea Family Y. Executive secretary April Jeppson said ymca360.org offers free videos and articles on exercise and workouts that can be done at home, and local instructors Shannon Bordeaux and Whitney Sauer have been posting workouts to the Albert Lea YMCA Facebook page. Sauer, the community program director for Albert Lea and Fairmont and the local youth sports coordinator, said she has been posting activities to help children keep their sports skills sharp with small challenges as they are home from school.

“I hope that our community knows that we’re there for them and I hope that they stay with us as we try to figure this out all together, and if they need anything they can always reach out and ask us,” Sauer said.

For her part, Karsjens said she will focus on getting links to routines and songs posted on themerakistudios.com so her students can practice for the upcoming spring recital. She said other staff have been posting videos on the studio’s Facebook page as well. The studio staff opted to close the studio last week to show a unified front and publicly show they were going to be proactive in case another organization was on the fence about whether to close or not.

“We could help by showing them that we were taking action and that this wasn’t a political stance, this was a health stance and we thought it was best for our community to do this,” Karsjens said. “So we haven’t been quiet about #flattenthecurve and #toghetherathome. It’s not peer pressure, maybe just a sense of unity within the community that we all need to do this so that it works.”

The science behind the coronavirus