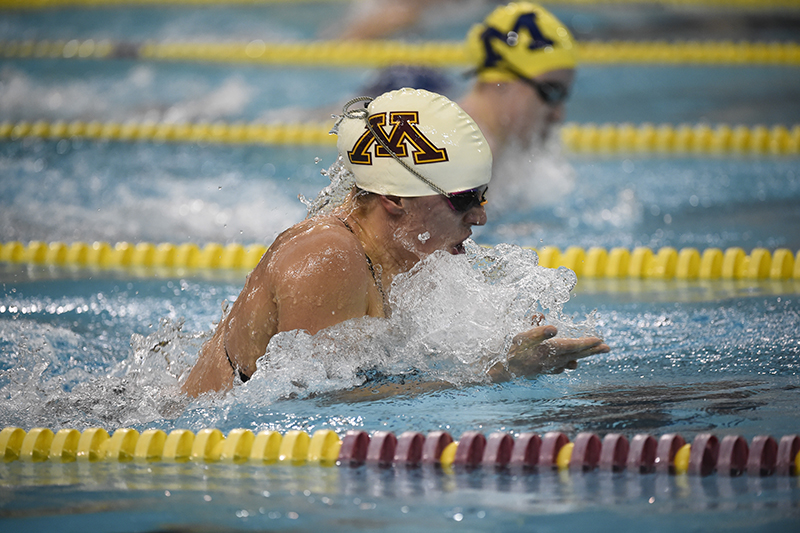 Albert Lea graduate Lindsey (Horejsi) Kozelsky, now a senior at the University of Minnesota, was scheduled to compete in the NCAA Championship swim and dive meet until the NCAA decided to cancel all of its winter and spring championship due to COVID-19. - Photo courtesy Craig Lassig

Wednesday morning should have been the start of the NCAA Division I swim and dive championships in Athens, Georgia. Albert Lea graduate Lindsey (Horejsi) Kozelsky, now a senior at the University of Minnesota, was set to cap off a stellar collegiate career with potential championship runs at both the 100-breaststroke and the 200-breaststroke.

However, due to the ongoing effort to slow the spread of COVID-19, the championship meet was restricted to no spectators and eventually canceled altogether by the NCAA less than a week before it was slated to begin.

As of March 12 the meet was scheduled to go on as normal, but the coaching staff was starting to prepare the qualifiers for a meet with no spectators in the stands.

It was on March 11 when Kozelsky was hit with the first wave of cancellations. As part of her masters program for the university, Kozelsky was student-teaching in Richfield. That night, Kozelsky received a call from her supervisor saying all student-teachers were being pulled from their placements effective immediately.

The following morning, the championship qualifiers went to their early practice as they normally would. However, when the head coach canceled the afternoon practice and replaced it with a  team meeting, Kozelsky knew something was wrong.

“Our coach messaged us about canceled practice Thursday night and said everyone who made NCAAs needs to come in for a meeting,” Kozelsky said. “That’s when I was like ‘Oh my goodness, I don’t know what I would do if NCAAs got canceled.’” 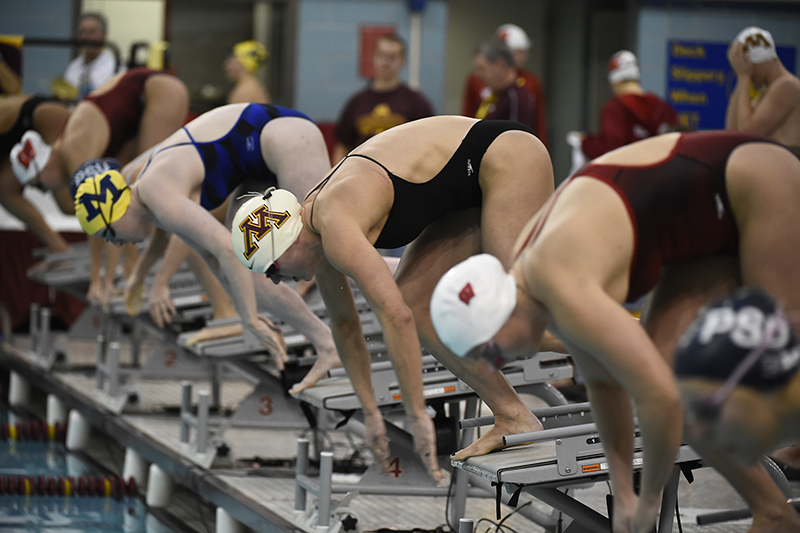 Before the NCAA announced the cancelations, Kozelsky qualified for the NCAA Championships in both the 100-breaststroke (58.66) and the 200-breaststroke (2:08.66). – Photo courtesy Craig Lassig

As of their meeting, the NCAA had yet to officially announce it was canceling the meet, but the Atlantic Coast Conference had announced they were pulling out of the meet. The coaching staff informed the swimmers they expected the Big Ten to follow suit, and soon after the NCAA announced all its championship tournaments were canceled.

“It didn’t really set in on Thursday at all,” she said. “I was kind of in denial about it. They can’t take away my senior (national championships). I kept thinking ‘maybe they’ll let me swim it next spring’ or ‘maybe I’ll get another year of eligibility’, just something crazy like that.

“It was Friday morning when I woke up and it sunk in, ‘I’m done swimming for Minnesota.’ That was a really hard pill to swallow finally. It still hurts.”

Kozelsky said she didn’t swim her best individual times at the Big Ten Championships, but swam her best time ever in her leg of the 400-medley relay. It was part of her and the coaching staff’s plan to push hard to qualify the relay, make it through her individual events and then blow the competition out of the water at NCAAs. Not coming away with an individual Big Ten title pushed Kozelsky to set the goal of winning the national championship in the 100-breaststroke.

“That’s the hardest part for me, honestly,” Kozelsky said. “Our relay my freshman year won at Big Tens, but not individually being able to say that I won a Big Ten title or an NCAA title was really hard. Just because I had been fixated so much on NCs and then for the NCAA board to take that away. You go through a grieving period almost.”

Kozelsky credits Crossfit, Crossfit coaches and university coaches with helping her process everything and put everything into perspective. Now, Kozelsky is in North Carolina spending time with her husband who is stationed there. Kozelsky said she’s unsure of what’s next for her.

She had hopes of competing for a spot at the Tokyo Olympics, but she has doubts as to whether the games will still be held. With some of the biggest swimming countries, like Italy and Hungary, canceling their Olympic trials, she said there are too many unknowns to be sure of anything.

Even after having the chance at an NCAA championship taken away from her, Kozelsky is still keeping a positive outlook.

“If you look at all the pain and loss that comes from, there’s actually a lot of good that comes from this too,” she said. “You really get to set your perspective on what matters in life. Swimming was a wonderful gift and it was a blessing to swim for the University of Minnesota, but it isn’t everything.

“I might never see the fruition of my work this season, but all of my work wasn’t for nothing. All of the underlying things I might have done in practice, like showing my teammates some of my characteristics, that encapsulates the work we’ve put in this season more than a time on the board. Swimming is a great thing, but I want to walk away from Minnesota with them remembering me as a person and not necessarily as just a time.”