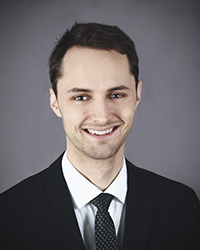 Frandle joined the firm in 2016 following graduation from Mitchell Hamline School of Law.

“After many years of thoughtful consideration, and after a mutual determination that the firm was a great permanent fit, I was honored to accept the offer to become a shareholder of the firm on Jan. 1 of this year,” Frandle stated in the release.

Frandle lives on a small rural acreage with his wife and two children. In addition to practicing law, he finds much enjoyment working on his farmhouse, barn and acreage. While he and his wife have no farm animals at this time, they believe a few chickens and goats will be great lessons in responsibility for their children at some point in the near future. Outside of work, Frandle also enjoys serving locally as an election judge in his township, as a support and advisory member of the Blue Earth Youth for Christ chapter, in his church as a worship leader, and as an Adjunct professor of law at Mitchell Hamline School of Law.

“Since joining the firm, Eythan has developed a reputation for his creativity and persistence in advocating for his clients,” managing attorney Matt Benda stated in the release. “He clearly enjoys coming to work every day and has a passion for helping solve problems. We were honored he accepted our offer to become a shareholder with the firm.”

When asked about one area of the law that he is passionate about, Frandle said, “Estate planning and nursing home planning. It is like working on a complex puzzle. I can add significant value when the puzzle is finished and the client’s estate can be preserved for the next generation.”