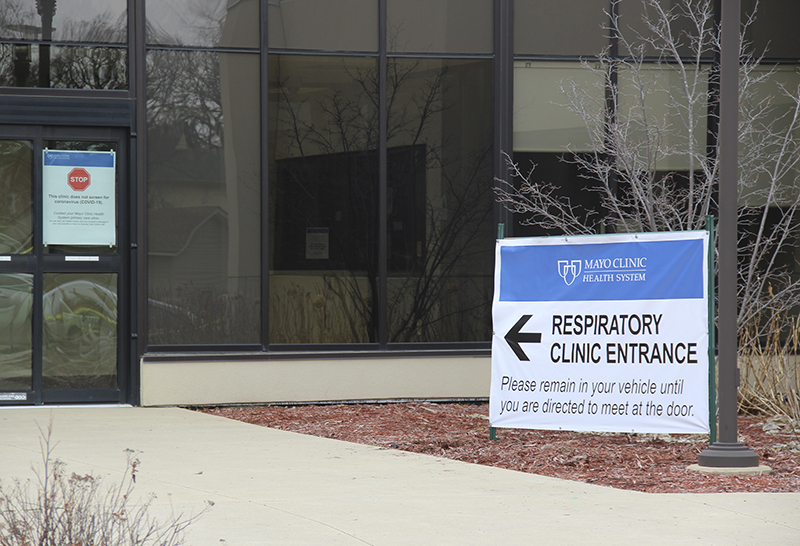 As COVID-19 cases swell across the United States, health care institutions are starting to feel the strain.

In some portions of the world, clinics and hospitals are nearing a breaking point. New York City is seeing a doubling of cases every day and is currently seen as the nation’s epicenter for the coronavirus at more than 37,000 testing positive for coronavirus. Gov. Andrew Cuomo revealed Thursday morning that the number was sitting at 37,258.

While numbers locally remain fairly low compared to national averages — 10 in Mower County, none in Freeborn of Faribault counties, five in Dodge County and five in Steele County — Mayo Clinic Health Systems is continuing to take steps to try and stay ahead of the crisis, which promises to see an increase in Minnesota.

“I think if we look at international trends in terms of how this proceeds, I’m hoping that with the governor’s order yesterday of having people shelter in place, really adhere to it and stay home we can slow the spread,” said Mayo Clinic’s Dr. Deepi Goyal Thursday morning. “That said, I think we can fully anticipate those numbers to rise.”

In its daily report, the Minnesota Department of Health Thursday showed a spike of 59 cases statewide from Wednesday with a total 346 cases testing positive for COVID-19, including the state’s second death. In total, between state testing and testing done by external laboratories, nearly 13,000 tests have been conducted.

In the face of that, Goyal is one of the many people who agreed with Gov. Tim Walz’s executive order Wednesday to shelter in place for the next two weeks, which takes effect at 11:59 p.m. Friday night.

“One hundred percent I think it was the right position,” Goyal said. “I think we have to take drastic actions.”

Over the past few weeks, Mayo has been a major force in the state of Minnesota, first by developing a diagnostic test earlier this month and then implementing a drive-up testing option that was first launched in Rochester and expanded to all sites outside of Rochester not long after.

The next step is the opening of respiratory clinics that will keep those with respiratory illnesses both in people with COVID-19 and those without separate from all other cases.

“When a patient calls the nurse line, they’re going to have the symptoms,” Goyal said. “It’s going to be unclear what those respiratory symptoms are and whether they could be related to COVID. We’re trying to bring those patients to one site.”

Mayo has other plans in the works as well, including clinic sites for those patients considered the most at-risk, including newborns and mothers.

“These are clinics designed to minimize the risk of exposure,” Goyal said “We’re trying to figure out what those sites would be.”

On top of these things, Goyal said that as early as next week there could be the establishment of curbside anticoagulant clinics that would test blood levels in patients who use blood-thinning medications such as Warfarin. Curbside pharmacies are also in the works.

Mayo, like facilities across the country, are dealing with the same challenges of making sure people are keeping their distance while still providing care. To that end, Mayo is pushing the fact that people with both possible symptoms of COVID-19 or related to any other illness or medical issue call before showing up to the hospital.

“It’s important for people to understand that they need to call first before going to see their provider as we move toward virtual visits and a lot of the innovative options,” Goyal said.

This coincides with a push towards telemedicine, something Mayo has been relying on already before the rise of COVID-19.

“It has (been in use), but we’re really aggressive in pushing it even further,” Goyal said. “Telemedicine encompasses several things — anything from a phone visit to a video visit, to a robot. All of our appointments to clinics are moved to a phone-first model to try and avoid face-to-face visits.”

Not only is this Mayo’s effort to try to reduce the spread, but it’s also a move it hopes will protect its own staff as the threat rises as cases continue to increase.

“Protecting our workforce is going to be critical,” Goyal said. “If you look at New York and other areas that have been hit hard, a lot of healthcare workers are getting ill. We have to be sensitive to that. How can we care for patients while recognizing that?”

It’s also key in recognizing the potential strain on facilities in the future if numbers continue to rise quickly.

While Austin has an ICU that’s been prepared by the Rochester site to cope with a situation like this, Albert Lea faces the challenge of not having an ICU. Goyal said, however, that Mayo’s strength is its ability to work as a health care system rather than individual sites and that satellite locations benefit from their close connection to Rochester.

“We’re working really closely with Rochester to deploy resources across the region efficiently and effectively,” Goyal said. “I think given the circumstances, I think Mayo is in a really good spot. They are really deploying the resources where they are needed.”

During this time Mayo Clinic and its health systems locations are pushing patients to call first and a big step in that is by going through Patient Online Services.

If you don’t have an account, patients are urged to create one to make use of Mayo’s services.

To create a Patient Online Services account on mayoclinichealthsystem.com:

1. Go to Patient Online Services and select “Create your account.”

2. Complete the online form to begin an account creation. Patients will need their individual Mayo Clinic number, which can be found on letters from providers, appointment reminder letters or billing statements. Or, call 1-877-858-0398 (toll-free) between 7 a.m. and 7 p.m. to get the number.