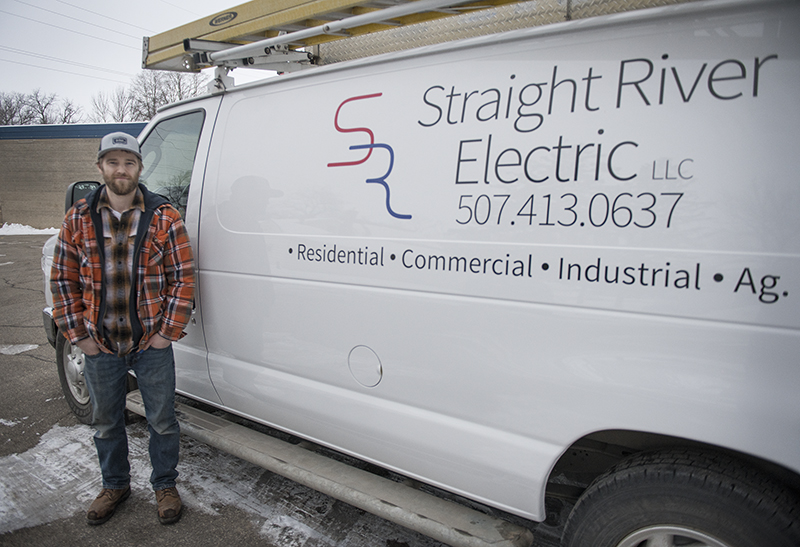 A chance summer job turned into a full on career for one New Richland native.

Orrie Anthony ended up working as an electrician’s apprentice the summer after he graduated from NRHEG, and said he liked it well enough to continue.

Anthony worked for different shops in Owatonna, Mankato and Waseca, and was 23 years old when he obtained his journeyman license.

In 2016, Anthony decided to strike out on his own and started his own business, Straight River Electric. While the business has a shop in Owatonna and Anthony runs the office side out of his home in Owatonna, Straight River Electric has a coverage area that spans at least five different counties, from Albert Lea to Waldorf, to Waseca and Owatonna and down the Interstate 35 corridor.

“We really cover a lot of ground,” Anthony said.

Anthony, now 31, said his time working for different businesses before starting his own was “a blessing in disguise,” as it helped him learn how others do things, including what works when running a business and what doesn’t. For example, working for smaller shops taught him how to be more resourceful, he said.

Anthony and his wife are looking to move into the country, somewhere between Owatonna and the New Richland area. His ties to the area led him to be connected with Hartland Electric owner Lonnie Korman, whose children Anthony went to school with growing up, and who was also looking to sell Hartland Electric.

As Anthony said he didn’t want to buy the Hartland Electric building, there were some things to work out, but the two men made a deal in November 2019. Straight River Electric bought out Hartland Electric, taking on the business’s clients, as well as buying the shop’s work van and hiring on its other electrician, Aaron Chicos, who Anthony said had worked there for 20 years.

“He’s really kind of the cornerstone of the whole deal,” Anthony said of Chicos, who he said brings great relationships with Hartland area customers to the business.

In addition to Chicos, Anthony also has a part-time apprentice working for him, Braden Routh, who’s going through electrician courses at Riverland Community College in Albert Lea.

Straight River Electric covers a wide range of electrical work, from residential and commercial to industrial and agricultural. Residential and agricultural work makes up the majority of the business’s workload, Anthony said, and he personally enjoys the agriculture work the most, especially control work and bin and driver setups. While Anthony didn’t grow up on a farm, he said he worked on a hog farm in high school and was around other farms growing up. He knows how the whole ag system works.

“If hog barns didn’t smell I’d like them even more,” he said jokingly.

There’s no typical work day or work week when it comes to being an electrician, Anthony said, and he typically averages a 60- to 70-hour work week himself. Those hours do fluctuate, and August through New Year’s tends to be the busiest season for Straight River Electric. Making sure there’s enough work for his employees is always in the back of his mind, Anthony said, but thankfully that has not been a problem at all for his business.

He said he finds it challenging when bidding for jobs and seeing some electricians or businesses undercut other bids due to not having a thorough-enough understanding of the national electrical code. Anthony said he holds himself to a high standard with his knowledge of the electrical code, and that can sometimes be difficult to explain to customers, as the code takes continuous education for electricians to understand themselves.

While running his own business comes with its own challenges, Anthony said he likes that he has the freedom to decide what direction he takes Straight River Electric in, and what equipment he and his employees use. He said it helps them to serve their customers better, as it helps them examine and execute the jobs they take on.

With a noticeable shortage expected and already evident in some trade or skill jobs, Anthony said there are good jobs to be had as an electrician, and there’s a noticeable need in areas where shops are closing due to owners and employees retiring.

“There seemed to be shoes to fill, and I’m glad to do it,” he said.