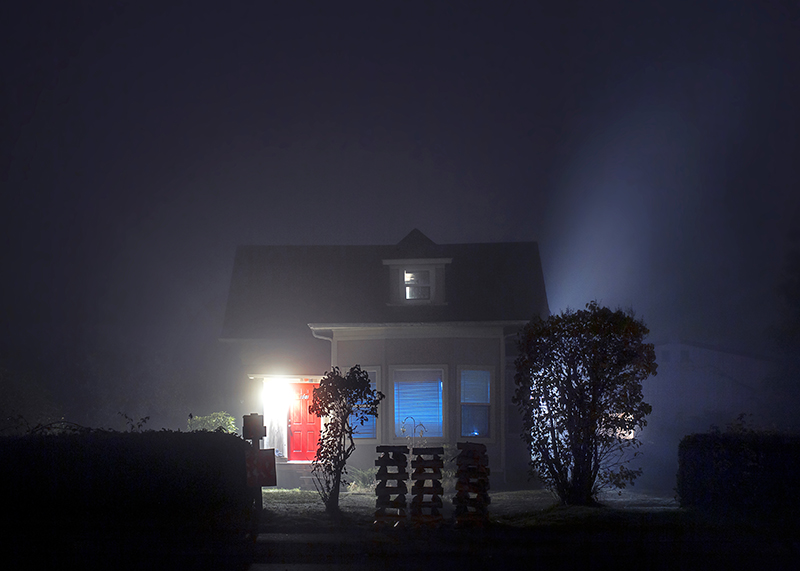 “House Hunting,” a solo exhibition of photography by Chelsea Reeck, opened March 10 and will run through April 28 at the Freeborn County Arts Initiative gallery in downtown Albert Lea.  - Provided

“House Hunting,” a solo exhibition of photography by Chelsea Reeck, opened March 10 and will run through April 28 at the Freeborn County Arts Initiative gallery in downtown Albert Lea.

The series, described in her artist’s statement as “a study of suburbia at night,” has been an ongoing personal project for over a decade. Reeck said in an email how it started when she was out of state for college and dealing with some painful family transitions happening back home. She describes the project’s inception as a kind of accidental therapeutic exercise.

“This dramatic shift/loss started me on these nightly walks through sleepy Bozeman, (Montana) creeping into other people’s backyards. House hunting.

“To me this was simultaneously a search as well as a construction. These safe suburban family homes looked ominous and mysterious from my vantage point. This contradictory symbol of what I thought family and home are/were. I became sort of obsessed.”

Some 12 years later, the obsession remains. While her purpose behind the nocturnal meanderings is more defined these days, the excursions themselves remain a form of impromptu art therapy. Reeck said she doesn’t plan in advance which neighborhoods or houses to shoot. Rather, she follows the weather.

“It’s also very peaceful and cathartic, the act of going out and shooting at night. I feel like I have the whole world to myself,” she said. “The last couple years especially I have really let the weather dictate when I shoot. I hate to miss a night of fog or a thunderstorm. I feel like these elements really enhance the mood I am trying to create.”

“Her photos are beautiful and haunting,” stated Arts Initiative Vice President Erin Sandsmark in a press release for the show. “This work is complex and at times unsettling. It asks us to think about what we consider domestic.”

Reeck earned a Masters of Fine Arts in photography from Minneapolis College of Art and Design, where she is now an adjunct professor, in addition to running her own commercial photography business and cultivating a fine art practice.

The artist reception, originally scheduled for March 21, has been postponed until late April. The “House Hunting” exhibition will be available to view during the gallery’s regular operating hours, which are 1 to 4 p.m. Tuesday, Thursday and Saturday, and from 4 to 7 p.m. Friday.

How much: free and open to the public