A celebration of life for Richard Foss will be Friday at New Life Christian Church in Albert Lea. Visitation is at 3 p.m. and the service is at 4 p.m. with a meal following. 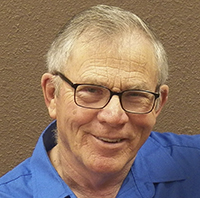 Richard was born May 22, 1949, to Homer and Bernice (Mitchell) Foss in Winnebago, Minnesota. He was the fourth of seven children and graduated from Winnebago High School.

In 1968, Richard joined and served in the U.S. Army until 1970. He then lived and worked in Minnesota for a time before moving to Texas, where he lived for many years. Richard worked in the oil fields of Odessa, Texas, then as an electrician in east Texas. He also attended seminary, becoming a pastor and pastored with longtime friend Harvey Lynn DuBose. In addition, he drove semi-truck and managed several businesses. After retiring, he delivered parts for NAPA.

Richard loved to go camping. He especially loved to ride around in the golf cart with his doggies. He also liked to play pool, go for coffee with friends, go to concerts, serve at the church, explore new scenery, make his famous lasagna and, most of all, spend time with family. Richard had a huge heart for others. He made sure there was an extra bedroom for anyone who might be down and out. He touched the lives of many and didn’t miss an opportunity to tell them how much Jesus loves them.

He is preceded in death by his parents Homer and Bernice Foss, and brothers Alan Foss and Dennis Foss.