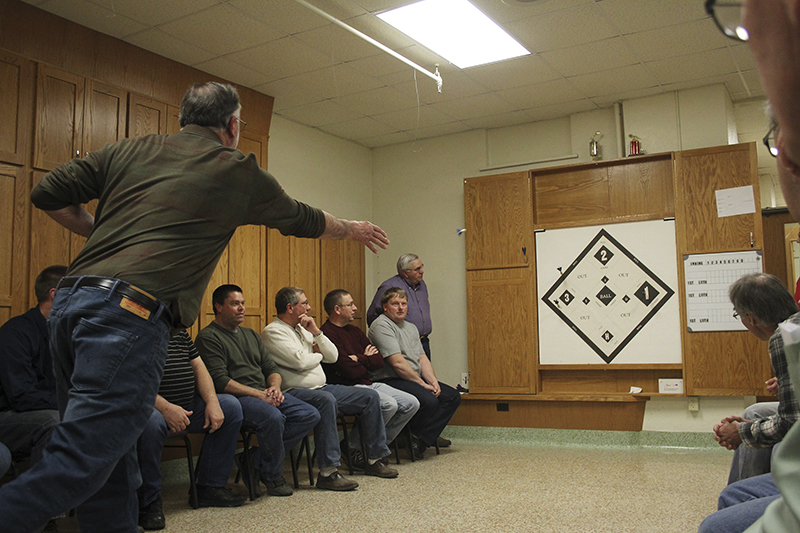 A player throws a dart at the board during the postseason tournament in 2018. - Sarah Kocher/Albert Lea Tribune

This past fall, the Brotherhood Dartball League began its 50th year, bringing teams from numerous area churches together for a little fellowship and friendly competition.

Chris Sorensen, who plays for Pickerel Lake Church, started in the league in the mid-90s after returning home from college to help his father farm. Sorensen said he started playing because it is a tradition at his church, and he followed in the footsteps of his father and uncles. He talked about why he has stayed in the league for over 20 years.

“We’re all competitive, and we all want to do really well,” Sorensen said. “But it’s really all about the fellowship — being able to get together and visit with the different guys and even the guys on your own team you don’t see much during the week.”

Currently there are 12 teams in the league, and they meet each Monday night to play three games of dartball. Rules are the same as baseball, except players go through the “batting order” taking turns throwing darts at a board with designated spaces that each have different outcomes. The entire league plays on Monday nights with two teams meeting at the various churches for one-on-one match-ups. They play three games with nine innings and a batting order of nine players, all sitting along the side of the throwing lane.

When the game is over, teams share a small meal, usually complete with sandwiches, cake, pickles and a beverage. Players from both teams mingle and chat with one another during the meal and enjoy their sense of brotherhood. 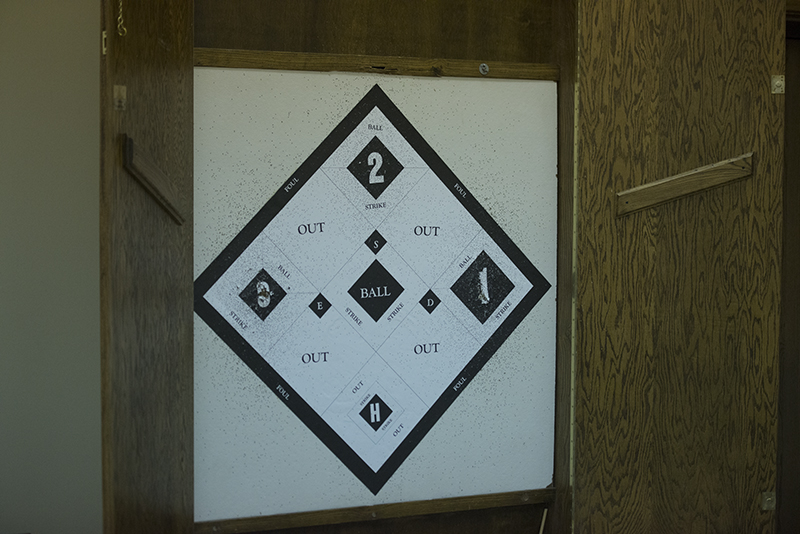 Each church in the league has its own board. – Tyler Julson/Albert Lea Tribune

Barry Coughlin plays for Ascension Lutheran Church and has also been playing since the mid-’90s. He said his favorite part is the camaraderie he shares with everyone else who plays. While he admits he might not know everybody’s name in the league, he recognizes the people he has played dartball with.

“I’ve marveled over the years,” Coughlin said. “Sometimes you’ll see a person one night a week, sometimes one night a year at dartball. Then you’re going around town and you’ll see somebody and think ‘Where have I seen him before? It’s dartball.’ We all have something in common. If nothing else, we’ve all got that.”

Lunder-Round Prairie, Trinity Lutheran, Conger-Bear Lake, Ascension, Mansfield, Pickerel Lake, First Presbyterian, Emmons, Glenville, United Methodist, Alden and First Lutheran Albert Lea are the 12 churches currently in the league. When the regular season is over, all 12 teams meet at one church for the season-ending banquet and a tournament to crown the champions.

Lonny Hagen, who started in 1991 and is the secretary/treasurer, got his first attempt at throwing a dart in his grandfather’s basement.

“A lot of it is just passed down from family member to family member, getting the younger guys involved,” Hagen said. “You try and make a team, you grab what you have and get some subs if you need them and before you know it, everyone is having fun. That’s what keeps it going, is the fun.”

John Hubly, the league’s current president and a member of Lunder Round Prairie, echoed his fellow players’ feelings.

“I think the more fun part of it is the two teams getting together and heckling back and forth throughout the games,” Hubly said. “It’s not so much about winning — sure you would like to win — but it’s the friendly banter. You get together, heckle each other and it’s just a lot of fun.”

50: Years the Brotherhood Dartball League has been in existence 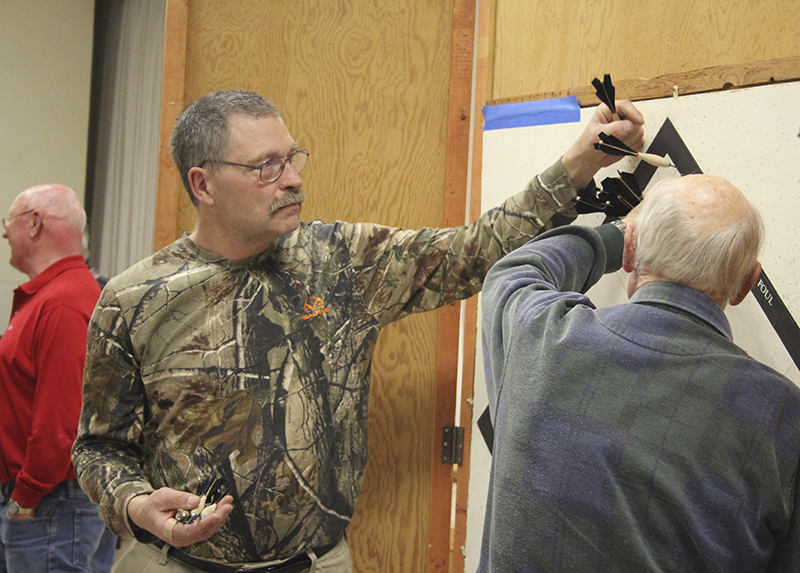 Lonny Hagen removes his practice throws from the board during the 2018 postseason tournament. Hagen started playing in the league in 1991. – Sarah Kocher/Albert Lea Tribune