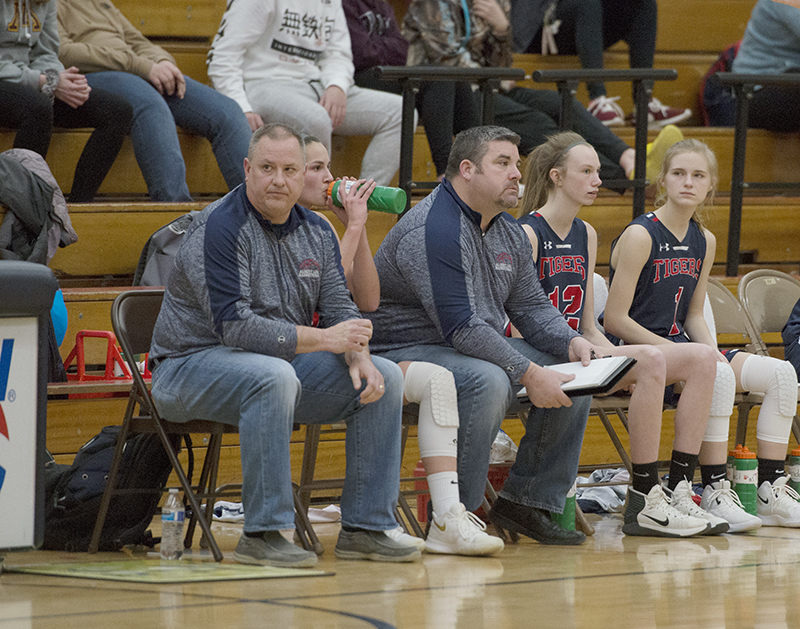 Coach leads Tigers to best season in over 5 years

In his second season at the helm of the Albert Lea girls’ basketball team, head coach Jason Thompson has started the Tigers on the path to success and set the program up for a bright future, leading him to be named the 2019-20 Albert Lea Tribune girls’ basketball Coach of the Year.

Thompson talked about the key to his coaching style.

“One important piece is letting the girls know that you care about them as players and people by building those relationships,” he said. “Ultimately, my goal is not to just make them better basketball players, but make them better individuals by developing their leadership and life skills as well.”

Thompson credits the team success to the work each of the girls put in over the summer as well as the girls’ willingness to buy into the program’s ideas.

“I think it starts with our summer program,” Thompson said. “We had great participation in everything last summer. There were a lot of girls who really improved their game, but it also increased the learning curve to what we were doing once the season started.”

Thompson also said the team tried to speed up its game this season, which allowed the players to go out and just play their game without having to think about it too much. Another aspect to the success was building continuity throughout all levels of the program, working to run the same offensive and defensive schemes so all players were learning the same things.

One of the biggest differences Thompson noticed this year was the defensive intensity starting to pick up in the second half of the season as well as a newfound desire to score from some of the players.

One of those players was sophomore Taya Jeffrey, who led the Tigers with 480 points this season. Jeffrey talked about having Thompson as a coach.

“I think coach Thompson is a great coach because he comes to practice and wants to make us 1% better every day,” Jeffrey said. “He brings energy and intensity to make every one of us want to be that much better and work that much harder. He assists us to also be great people and sets us up to be successful outside of basketball.”

There is reason to be excited for the future of the program as well. While the Tigers will lose two majors pieces of their regular varsity lineup in seniors Sam Skarstad and Ashley Butt, there are many talented juniors, sophomores and freshmen who saw a lot of time on the floor this season.

“I think he is a good coach because he expects so much of us and that translates to us expecting a lot from ourselves,” Skarstad said. “He knows that we are capable of more and wants to help us get there.”

Despite losing two talented seniors, Thompson is ready with anticipation to get started with the next season.

“I know as a coaching staff we are really, really excited for the talent coming back next season,” Thompson said. “I thought the lower level teams behind the varsity also had great seasons for development and confidence. This past season, I thought we really increased our program depth. There will be girls getting significant playing time next year if they keep up with their development and commitment.”

On top of the high school programs making significant improvements, Thompson said the youth program at the Albert Lea Family Y plays an important role in the development of the program.

The Tigers finished eighth in the Big Nine Conference regular season standings and Thompson said he thinks the team will be able to improve upon that next season.

“The next step is to get back to the grind,” Thompson said. “I think as a program we need to continue to get stronger and quicker, so strength and agility training this summer will be paramount. But we also can’t be complacent with the recent success. It’s continuing to put the work in during the offseason to be able reap the rewards later.”